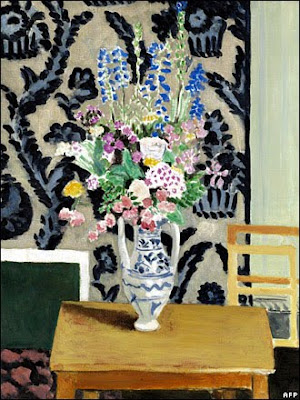 "I work without a theory.....I am conscious only of the forces I use, and I am driven by an idea that I really only grasp as it grows with a picture."
So, said Matisse, in the thirties, when he was criticized and mocked by various  sections of society. The Artistic Left, (much of the Bloomsbury crowd) in England despised both his work for its bourgeois inclinations and his boring personality. Even Venessa Bell and Duncan Grant who would paint the same subject matter just a few years later. Matisse was vilified by the intellectual French Left because his work didn't possess the 'an idea" as opposed to Picasso whose work presumably did.
Today, Sotheby's in London will auction the paint above. It will go for a great deal of money, which isn't the point, but it is ironic. What is celebrated today will not necessarily be celebrated in 80 years time while the reverse is is often the case.
Posted by cloudsandsea at 16.4.10