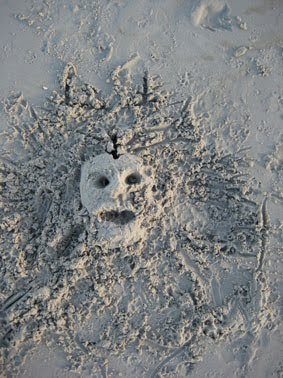 I will now relate how an artist frequently gets into the unknown --- and the point of this story could equally apply to making a human relationship work as much as to creating an artwork.
The artist in this simplified story is a painter. He gets an idea for a painting. The muse has paid a visit, the light has come on, inspiration has struck -- whatever -- and now the idea must be given form. The urge is powerful, the feeling exuberant and the approach is confident. So the artist gets organized and with high hopes sets about  transcribing the vision, from his mind on to the canvas.
After working for a while he starts to sense that things are sagging somewhat and the painting looks very boring. It has no spirit. It looks competent enough but lacks the spark and mystique that was in his mind at the beginning. Something has been lost in the translation. How odd; it is not transcribing.
So he redoubles his efforts and sets about rescuing the situation, but to his dismay it only seems to get worse. He becomes frustrated and anxious, and works harder to redeem things but it just gets drearier, and the more he tries, the more the life drains out of it. After all his hours of ernest work, it looks ludicrous, pretentious and soulless. What lies before him now is a full-blown expression of his delusional art pomposity. He feels delusional, failed, and foolish.
At this point, he could scrape the canvas clean and walk away -- or else title the painting "The Wreckage of my Ego" and hang it on his  studio wall as a humbling reminder. Painting teaches much about failure. Instead, as if inspired by divine perversity, he decides to stay with the disaster and to deepen his disturbance. He hangs his head and utters many forlorn words such as  "Oh Shit" or "Oh God,  my God", why has thou forsaken me?" He has spoken  the magic words of surrender; they are the secret passwords, announcing that he is now on his painful journey downwards into the darkness. He feels appalling.
Part 2
Posted by cloudsandsea at 10.4.10