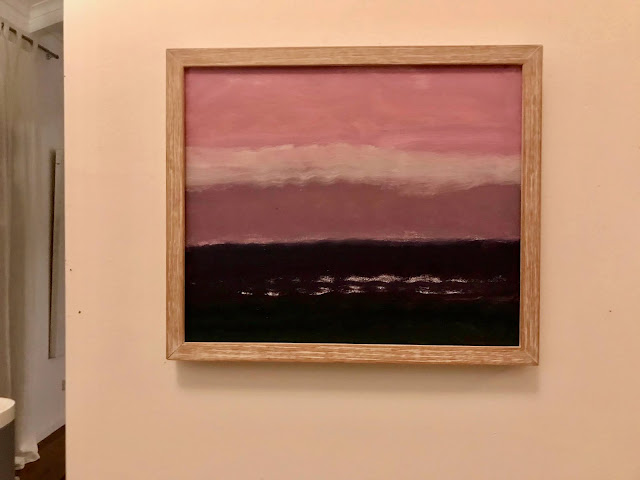 I was listening to Chopin's Études (Opus 10) this morning as I moved around my house on a small project, all the while I was glancing at the walls at a few pictures which I had framed and recently hung.

"That's it!"
It suddenly occurred to me that there was a poignant relationship between what I was looking at, and the Chopin Études. It's strange because from the very beginning of this series at the beach three years ago, I imagined these pictures as 'etudes' in fact, even though they are hardly more than twilight's faint whispers. But I don't wish to reduce Chopin's Études to that description.

This is my own understanding for things that I've made quickly to capture an ephemeral aspect of Nature. But saying that, there is also a lightness in many of these 'Études' which Frederic Chopin wrote when he was only 23 years old. There is a quirky and sometimes frenetic side to them with which I identify in my own small studies done at dusk. Each one has its own emotional logic embedded in its brushstrokes, and there is a repetitive motif which cycles through the colour wheel  in the same way that Chopin cycles through all the different keys, one Étude at a time.

In fact, each picture has 'its own idea' just like the Études by Chopin. And because they are small studies without a whole host of different relationships which might be housed in a larger and more complicated painting, there can only be room for one idea at a time.

When one listens to these small Études by Chopin I think one can understand that they too, possess but a simple melodic idea. It is in his Concertos where Chopin  develops a grand spiderweb of melodic harmonies. And a musical sketch is not too dissimilar to that of a painter's.

Each of my small pictures are distinct in the same way as each of Chopin's Études. And, although I also think that each picture is original, they are as different to one another as one sibling is to the next. Yet in them all, there is always a family resemblance somewhere, however obscure. And this ressemblance isn't just physical; not just the eyes, the ears, the smile, the feet! It relates also to the voice, the laughter, sense of humour, and the weird personal twitches shared in common between siblings but hardly discernable to outsiders. These are for me, in painting, the indescribable little quirks of a picture, the inexplicable brushstrokes or erasures, the marks of mistake rendering a work of art so distinctive and original, so human.

And one only has to hear the first measures of a piece of music before one recognises the hand and soul of Frederic Chopin. And so it also is with a painter whose originality is visible for all to see at first glance. It's in the signature of the hand. It cannot be faked.

This is for me the remarkable way in which Art runs parallel to Nature in that Nature's logic is as original as it is repetitive in our visual world.