Satie went out without an umbrella 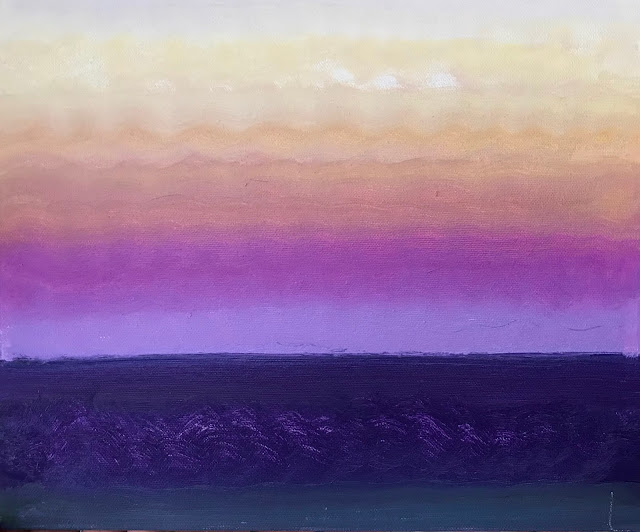 In Painting, I never struggled with the painting, nor colour harmony, not even drawing. I had to learn a lot and work at it of course, but it was never, ever foreign to me even from a very early age. It was a gift which allowed me to proceed in this thing I came to understand as Painting. I had a very intuitive grasp of Art, and in fact I took it for granted. I couldn’t believe that others around me didn’t share this.

My problem in Painting arose from me. I had to overcome all my own very personnel issues around creativity. I was my own problem, but Painting never was.

By studying music I have had to overcome the difficulties of the music. I was propelled
into piano from a long secret obsession with this black beast of creature which we had in our house. I never took lessons which were somehow reserved for my sister who didn't really give a hoot. But I languished underneath the piano until I was discovered and thrown out.

Fortunately, by the time I really did get ready to jump into the work I had been sober for a long while yet sadly, I am already of a certain age so my hopes have been somewhat muted thus far.

It has been work, and work which I have loved doing. Most of the time I am a mountaineer at the bottom of the cliff looking up to see what the task is for the day. I wasn’t given the gift of music. I was given the gift of Painting but something deep inside of me wanted the music.

But how?
At 14 I imagined that I was too old to start but began a few lessons anyway with a teacher at boarding school. I must have been so unteachable and scatter-brained that she lost interest in me and I gave up. At 19 in my second year at University, in the Art School, I thought I would really love try to play piano but I then thought; for sure I am too old, so I gave up again. Much later in New York I exclaimed: Screw Everything! And I bought an old creaky upright which was delivered on my 30th birthday. So now, I have played off and on for 38 years. Yes I have learned to read a little, I have learned a few classical pieces under my belt. Satie especially makes me long for the Moon like a teenage girl in love.

But now I have jumped into the Standards, the old show tunes from my parents youth with an abandon which almost shocks me. I determined to understand enough to enjoy myself which, to be fair, I already do a dozen times over. More to be revealed.