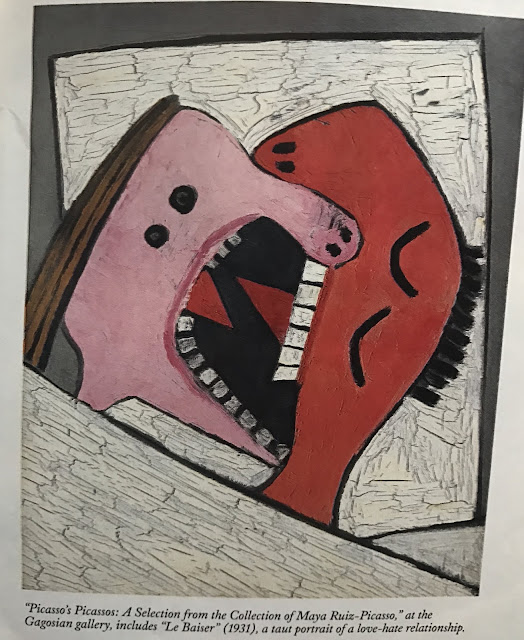 I have been thinking a lot about how difficult it is to express violence and the inhumanity of Mankind in a painting. It is rare that a painter succeeds as well as the image above by Picasso. This picture pierces the love/hate of a relationship in human terms. It is a war, not one between nations or religions but between the passions and demands of the human heart. How many crimes are committed in the name of love? On the radio, daily, I endure reports of terrible acts of violence perpetrated between individuals. With knives, swords, nail guns, broken bottles and pistols people go at each other. Mostly it is men killing women.

But even in the quiet of their homes do couples destroy one another with silence, mistrust and jealousy.

It is not a happy topic but fortunately Picasso made something extraordinary from it.  And although his ex-partners did not have kind things to say him as a man, art speaks louder than all the worst qualities which comprise the artist. In these days of the 'Woke' generation and that 'political-correctness' de jour, many would find my ideas insensitive. But for me, even art can wear the clothes of a villain.

Isn't the point of art to pierce our bias, and decapitate our prejudice??

I love this picture because it possesses a unity of graphic expression which seems to keeps moving within the boundaries of its 4 walls. It is a difficult image and it is a painting which speaks in decibels not in whispers. And I like it for that.