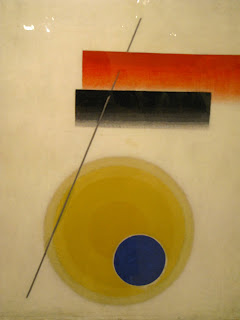 Somewhat overcast this morning, mostly grey in fact and yet the rain (la pluie) refuses to arrive. My days are so quiet that when the telephone rings (sonne),  it startles me somewhat. I spend most of the day in my painting studio. But I have also been reading a book by Sara Thornton entitled  "Seven days in the Art World" which is enlightening to say the least (le moins). One of its chapters is devoted to the nominees (nominés) for the infamous Turner Prize, and the  2006 winner, which was Tomma Abst, a painter living in London. Curious, I looked at her works on the net, as well as those of the other nominees. Her paintings are smallish (plutôt petit). I liked some of them. They reminded me of the Russians of course, I saw two exhibitions devoted to them last year in Paris and in London. The painting above (ci-dessus) is from the show in Paris at the Fondation Dina Vierny. I was allowed to photograph to my hearts content (tout son soûl), an unusual luxury these days but I forget who did this painting though.

One of the big surprises in her book is a revelation by one of the publishers of ARTFORUM magazine who confessed to Ms. Thornton:


"As for Contemporary Art, 95% of it cannot be taken seriously"

Mostly, I agree with that, but my eyes are always on the prowl, and they have to be: this is my world whether I like it or not.

Regarding the Art World, Paris seems to have lost its luster (lustre) in so many ways over the past 50 or 60 years. It seems to have missed out on most of the Hedge Fund money; the funnymoney, which seemed like an electrified arc between London and New York, a kind of permanent rainbow (un arc-en-ciel) between the two cities. They say that's pretty much over but I doubt it. There is already too much speculation built into the system. The French have older and different ideas about money, especially (surtout)concerning Art. I hope they never lose that unusual respect for the quiet poet slaving away in a small life somewhere; he or she, working for the dead and the not yet born. It is one of the things which I love about this Culture. There isn't another like it any where in this Internet-connected world and as they say: As long as it lasts (pourvu que ça dur).