Daffy Duck at lunch with V. 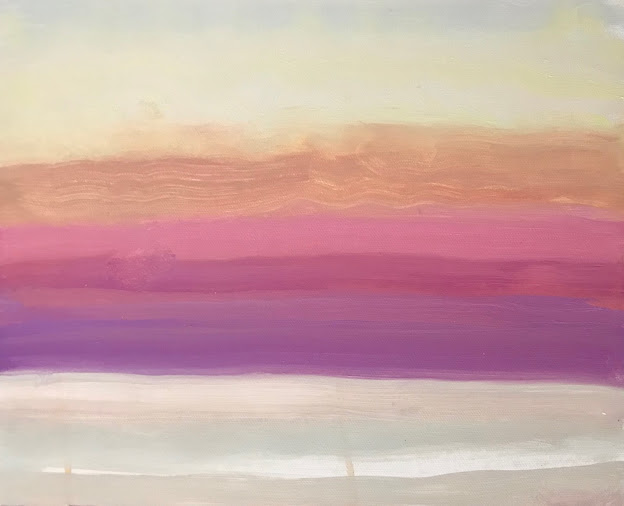 Evening Prayer Brunswick heads, 15 June 2020, oil on canvas board,
30 X 25 cm
I met V. for lunch the other day, her lunch really whilst I watched her eat. Her tiny arms and small hand made me think of a wounded bird. She had explained to me when I first met her months ago that she had contracted Lyme disease, and since then, she was losing the use of her right hand. Immediately, I had felt pity. Now, not 3 months later she said that her other hand seemed to be 'going as well', as she put it somewhat cautiously. I think she is brave but also she puts on a good front to mask the fear. Who wouldn’t? But she doesn’t complain, a quality I like in people. I have a few friends who complain incessantly and I want to run the other way when they start up.
This was our first lunch date, as it were. We had first met on the street in a small town near home last year. A mutual friend introduced us but quite briefly. Then we met again on the beach where I paint most days. She sauntered down the small pathway looking a bit fabulous in an outfit right out of Vogue and wearing a large hat from the 60’s. She’s quite slim, actually.
Then, a while later, she began to compliment my work on Instagram to which I responded warmly, in my own way. When anyone reaches out to me, I thank them. I was taught to do so from an early age.
Shortly afterward, V. not only gave me likes to the work I was posting but also began making up titles for the pictures relating to the colour and her own impressions of them. Most of the time she got it right though. Things like ‘Cassis framboise, fromage blanc’ and ‘Baked Alaska’, and one of my favourites; ‘Indecisive Enlightenment’. My small pictures and her crisp visual metaphors, coupled together as if Katherine Hepburn was in the sack with Marcel Proust.
So, that was then, how we began our acquaintance. And I insist, it is still an acquaintance but beginnings do begin somewhere, after all.
She began sending me rather cryptic voice messages on Instagram each night before she went to sleep to which I responded with even more cryptic GIFS. I sent them  later in the night because I am a night owl. GIFS are marvellous things. They display just the right touch, the light touch of the quixotic quip; Dorothy Parker drinking gin with Daffy Duck on a back lot at Paramount.
Thus, we continued exchanging a few thoughts online for a few months but when it seems to fizzle a bit and I don’t hear from her after a week I send her a GIF to stir the martini.
She likes calling me Mr Magoo which to be honest, kind of irritated me for a while. (Am I that bald and blind?) Go figure. But then she told me that she sent me voice messages because it was easier than typing with her crippled hand. So I felt sorry, and forgave her for the Mr Magoo thing.
She likes speaking French. I do too, but somehow I felt awkward speaking it with her in the middle of this small town at lunch. So we conversed in English, and I watched her eat a Middle Eastern dish with her poor wounded hand using a large spoon. That same hand which I imagined wrote lots of interesting things back in the day of her career as a journalist. She seems to be a bright, clever woman despite the infirmity, I think to myself.
I suddenly realised that she reminded me of my dear friend Joyce who passed away 4 years ago. I loved our friendship so much. I last saw her when I said goodbye after a dinner in her château in Autichamps. I was leaving the next day for Australia. It was early December. She knew we would not see each other again. She knew she was dying, and I imagine she was pretty sure she would end it herself a few months later before my return to France, but I couldn't know this that night.
When I wrapped my arms around her to say goodnight she seemed so frail and fragile that I felt that I was holding a small bird in my arms. She walked me out the gate and waited till I got in my car to leave as was her habit. The good manners of a Dutch woman from another age persisted. It was freezing cold, but there she was, waving her farewell to me as I drove away into the black night.
So at the end of our lunch date V. and myself said our goodbyes. I was off to an appointment with my doctor at 14h, and her, I don’t know where she was going. And though everyone seems to hug in this town we didn’t, due to Covid, due to discretion, or due to what the French call Pudeur, sans doute.
Posted by cloudsandsea at 2.7.20