death and drawing in Essaouira, Morocco 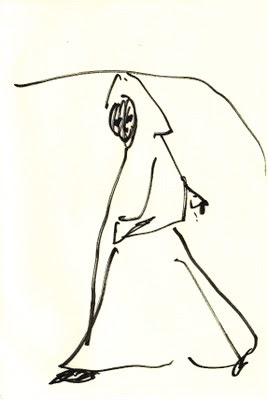 I put this up today because it has sat on my desktop now for years and I still marvel at the fact that I made it. I remember that it was on my first trip to Essaouira in 2006, maybe? But I love the drawing because it was one of several hundreds I made one week working in the streets and sitting in cafes. I love it because I didn't look at it until after I had left and returned to France to open up all the drawing books. At that time I was crazy for the small blank books which Muji made (and still does). They are quite small 10 X 15 cm, and contain a lovely off white colored thin paper. Small suited me because I was so insecure about going off to Morocco and thinking that I could make something of worth. Looking back, I can understand it. Nonetheless, I still like the intimacy of a small drawing. When framed in a very large white mat they gently pull the viewer into to themselves allowing for the most personal visitation. No room for anyone else to press in, to elbow one out of this affectionate, almost confidential rapport. But I do like large paintings too, don't get me wrong. But the seduction of small drawings
lined up on a long wall, each separated by  space just large enough to breath is for an art lover, a kind of catnip of sorts.

A friend of mine (a devout and practicing Buddhist) bought it from the show which I subsequently made months later. I was happy for him to have it. Sadly, a few years later he died very quickly of Cancer. I still have a photo of him which I snapped on SKYPE when we were chatting away and months before he even knew that he was ill, and that he was to die soon enough.