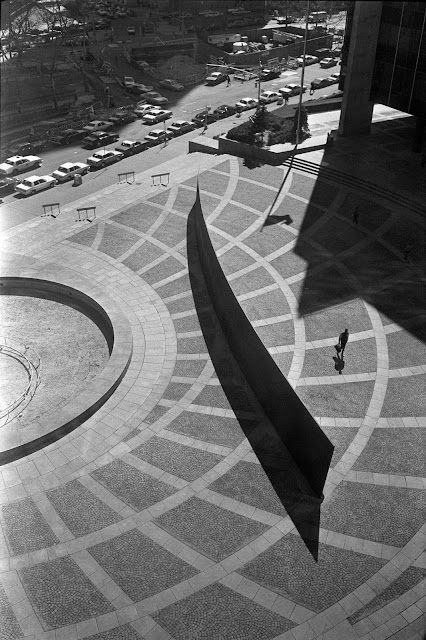 Mr. Serra’s “Tilted Arc”; which raised a storm of controversy after it was installed in 1981 in downtown Manhattan. It was removed in 1989

Richard Serra is back in the New York Times with a new and weighty piece about his show currently at Gagosian gallery in New York.

I remember when this piece was put into place in a plaza in downtown Manhattan. It raised my blood pressure then and as it did for many others at the time. It was a cultural fight over terra nullius which spilled out on to the sidewalk. Only the elite art establishment, including wealthy patrons and galleries, attacked those who opposed it. And, to be fair, it was an ill-advised purchase by the city of New York. I remember Leo Castelli hurling insults at those who opposed it by claiming that if the Pope had listened to the rabble of people, there would be no Sistine Chapel. It appalled me then, as it still does today to hear such disingenuous babble.

Cutting a plaza in two with a rusty steel wall of weight has nothing to do with anything that Michelangelo painted on the ceiling of the Sistine chapel. This rusty steel wall was in fact a barrier which separated one side of the plaza from the other. It did what war does to people, it cut the plaza into two spaces, cutting the people into two. Before that, it had been a place where Secretaries and workers would take their lunches; an open and sunny hour of their day. It had always been an open walkway so rare in New York City. 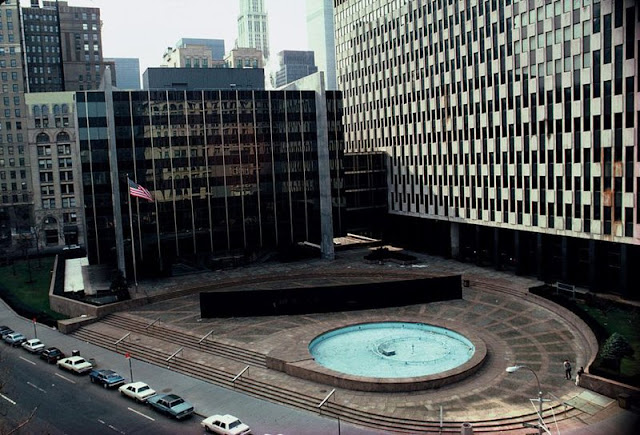 Maybe this was Richard Serra's idea at its conception. I do not know. But, I still see it as an elitist view which directly hindered
the daily life of everyday people. One can, and one should ask the question: What is the purpose of public art if it imposes a war on ordinary people and makes their lives worse?

Obviously, I feel that this piece was a terrible mistake, and it should never have been put into this plaza. Although Serra sued the city of New York, the piece, after much legal manoeuvring, was removed in 1989. There many were  people who lamented this decision but the great majority of them presumably, were able to return to Greenwich, Southampton, and other sunny and grassy spaces. Serra's works have already found homes in these spacious properties. 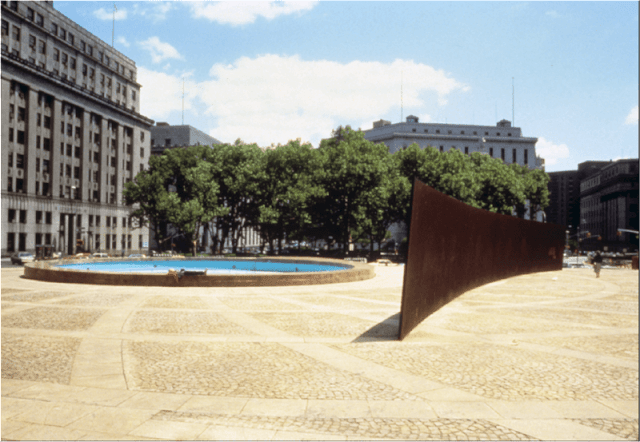 The Nazis burned books and paintings (as well as any vestige of Jewish life) in their attempt to control and close off the freedom of thought for citizens in Third Reich Germany. And, it may be a leap for most, but I see in this case, a parallel into how an elite, intellectual class tried to close off a physical space cutting it in half back in 1981. There was a 'gaslighting' of dialogue. It was a case of intellectual and cultural superiority ruling over the lives of ordinary people. What is really egregious is that it was pushed by the very people who made money on the deal.

As I understand it, Richard Serra has never changed his opinion about the whole affair, and his large work is popular. I am left with questions: Does an art work create harmony or intend to destroy it? Is a work dissonant for good reason or by arbitrary whim? Does a public  work look down on the public or does it allow them to look upward? Whose space is public space anyway? Is this aesthetic Form over Function?