Cato seizing the thing, before he committed suicide 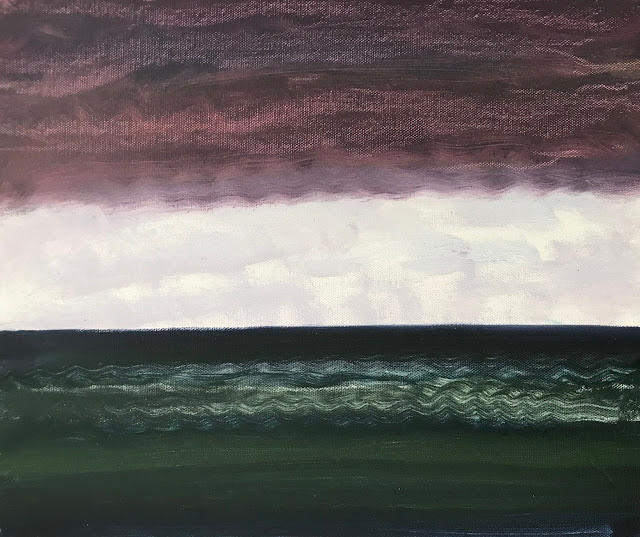 This painting was done a few days ago. It had been raining for several days beforehand, and consequently I hadn't been out to the dune. The sky was stormy as the picture indicates. I only set up because I was desperate to do something, anything! Because even after just a few days of not working there I can start to feel quite wacky inside. So, I set up, but I was not convinced by the light, or lack thereof, as it was blocked up in the West behind me. I knew that any luminosity would likely remain absent.

In any event I made this somewhat quickly before a raincloud arrived and I packed up and got back to the car just as it poured.

To be honest, I was not unhappy with it, but not unhappy either. I was happy to have gotten out into the windy ocean air in front of a rough sea full with whitecaps as far as I could see. It is a strange drawing but I saw it that way, and I didn't have time to think about it, judging from the dark clouds moving in from the South. It is strange because the upper layer of cloud is so cold in colour, the same for the middle stripe, it was a cool Prussian blue/citron mixed down to almost a pure wisp of grey. And below, the cold unruly sea full of Emerald green with a band of sunlight which kicked in but just for a moment. And after 15 minutes, it was done.
There was something in the cloud band that bothered me so I scraped off some paint to try to resurrect any light initially there. It's better than it was. Nothing more to say. I was grateful that it came off at all.

And this brings me to something which Cato said just over 2000 years ago.

And it makes me see, as a painter, that when we 'grasp the thing, style will follow.'

Style can never precede the 'thing seized'
any more than the cart can come before the proverbial horse.

one might say:
Seize the thing, and paint will follow. And this is important because the paint rarely proceeds the 'thing', the 'thing' must usually come first.

But this is a long discussion for another night.