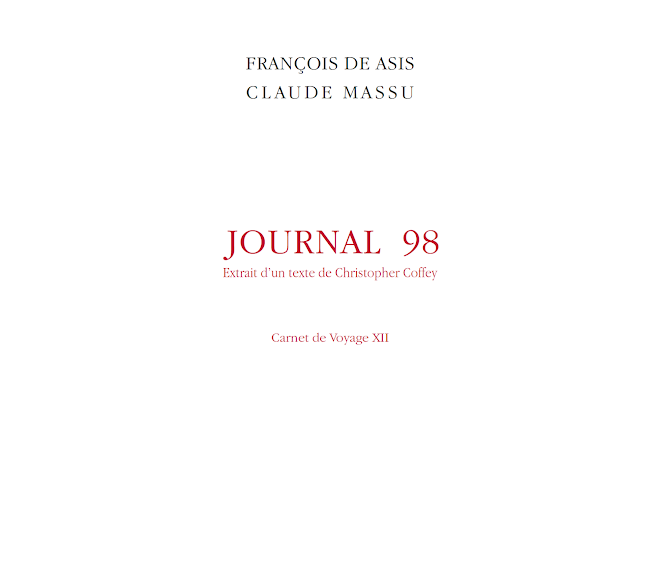 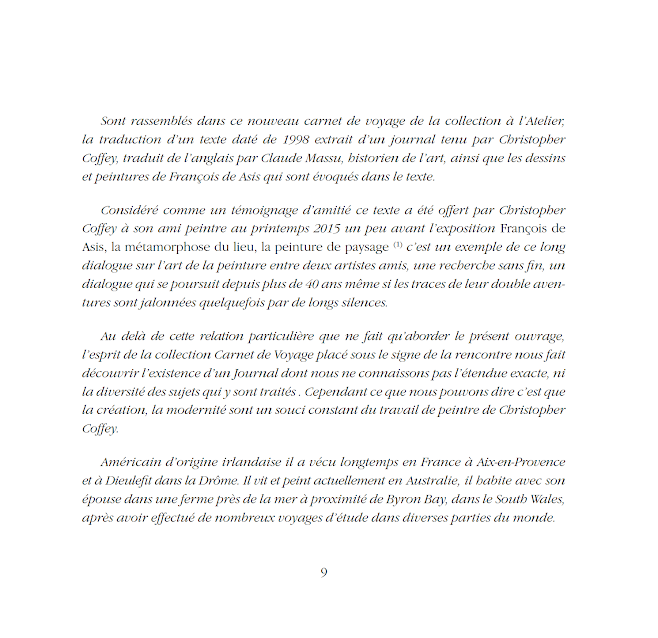 This was published 4 years ago. It came about because I sent François entries from my diary wherein I had noted my visits with him in his studio in St Marc Jaumegarde just outside of Aix-en-Provence. They were taken from the years 1998 - 1999.

Why those dates? I am not sure except that I came across them while re-reading some of my diaries and I thought that he might like to use them for a series of exhibits he was planning for the summer of 2015 in the  Aix. Of course there are so many more visits noted over the years but they are scattered like leaves throughout the diary. And my diary has been ongoing since January, 1986.

A short while later, after that summer, he wrote to me with the proposition of making a book out of them along with reproductions of work to which I referred in the diary entries.  Of course, I agreed immediately. Claude Massu, whom I did not know was engaged to translate the entries. He is a professor of English and Art History but also a colleague of François and his wife Éliane. I was sent the translation which I found quite good.

The book moves through the texts and the images of  paintings in an easy manner. François has made many books over the years and possesses an adept graphic sense. But like his other books, it is a collector's item which means that it was a very limited edition of perhaps 30 copies in total. Alas, they are not inexpensive. Once a few years back I was walking along St Germain when I saw them displayed in the window of a beautiful bookshop which only deals in very high end  books of contemporary Art.

As I was not part of the publication I had nominal input as regards to decisions for the book. I was simply invited as the author. Ideally, I would have very much liked to see a more "commercial" edition which could have been readily available in English worldwide perhaps through museum bookshops. Alas, that was not my call to make. But in any event, it was a wonderful experience for me to collaborate with my old friend François De Asis whom I met during those early years in France when I visited Léo Marchutz in his studio each day.

So, as I don't imagine that Journal 98 will ever see the proverbial light of day, I have decided to reprint it for fun in these pages in the original English. I think there are only about 15 different dates so once a week a few will appear in order by date.

Francois had been on the terrace when I arrived retouching a recent picture from Stephane's property. He had several pieces of paper in varying colors and tones which he was attaching to different areas of the painting.

One, (about 4 centimeters square) had been placed over part of the tower. It was reddish and slightly darker than what it was consigned to replace. He asked me what I thought of it with, or without it. I remember feeling a little like I was at the optometrist when asked to clarify which lens was clearer for me, this or that? So back and forth with the small colored piece of red, on, and then off again. What intrigued me was just how subtle were the changes, and how Francois understood the delicate transformations to the neighboring colors and forms. In fact, the entire surface was changed by just shifting these colored patches around. To me though, it seemed endless these combinations.

I arrived at 18h, he came to meet me as I got out of the car. We went down to the new round fountain (which his son Stephane had just made for them). Eliane was there reading. We talked about their 8 day stay near Forcalquier. François had been working on a view of the ruin not far from the property. Afterwards, we went into the studio to look at them. But first, he put up his latest version of the Barrage Zola which he claimed was his finest. It was done in just one session.

He then put up another version done over perhaps 4 or 5 sessions which we then looked at for a while. The second one seemed gentler and rounder as if the extra sessions had somehow softened the punch of the initial drawing. They hadn’t removed it, but certainly had embellished it such that it seemed as though fur had suddenly sprouted onto the bones of the first one.

We had often spoken about the different qualities inherent in those things done in one session compared with those done in 20 or 30 sessions. He has always admitted that to arrive at the ‘Forms’ he was looking for he absolutely had to pass through the latter paintings. There is no other way of getting an understanding of the motif except by pushing paintings back and forth until he is satisfied.

He thinks of the pictures done in one session as akin to the late piano sonatas of Beethoven while those really developed paintings, more like symphonies.

He said once again that the paintings done over time are infinitely richer in that they take longer to see and appreciate. While those done in one session are almost always more striking at first glance, they might lose their appeal more quickly. (I am not so sure)

Francois brought out a few of the pictures of the ruin done in Forcalquier. Amazing images! In one of them, the motif is hardly discernible as if I have not yet been given a map to find my way around in it. A fresh image; the kind of which I think de Kooning would have longed to make earlier in his career.

He then brought out a large one (40 figure?) which he had worked on each day. He admitted that it would be shortly destroyed but had wanted to show it to me. He said that he had had high hopes for it at the beginning but had lost his way. He was unable to retain his first impression, losing the whole of it to a multitude of parts as if it had been worked on by several different painters. He goes on to explain that despite the intense anguish which it puts him through, (and his family) he knows that he can never understand the complexities of a motif unless he abandons himself into a painting of many sessions done always at the same time of the day. (Monet, I think to myself).

He had come to the (my) studio a week before and had seen some things of mine from the summer, He liked some things but had harsh criticisms for some others. He wanted to talk about them. In effect, he criticized many of them for being “uneven” as my objects (cups and bowls) were treated very differently than the background or space of the painting.(!) I had to agree that he was right, and admitted that I had been seduced by the delicacy of trying to make a painting ‘look beautiful’.

His point being, that once a painting has been started one must follow those very first few strokes to the end regardless of their direction. Afterward, he showed me some drawings from Monterosso done last year and also drawings done from the vaporetto in Venice. All of the drawings were so reminiscent of Leo in their brevity and respect for space, and what light!

At one of these drawings (a Venice; rounding the turn at the Academia) I exclaimed

“My, how Japanese” to which he replied

“yes, absolutely!... it was like I was saying hello,,, a small hello to the Japanese!”

His face suddenly lit up with childlike wonder at the drawing as if seeing it for the first time himself (like a child being surprised at his own drawings).