an engagement with quibble 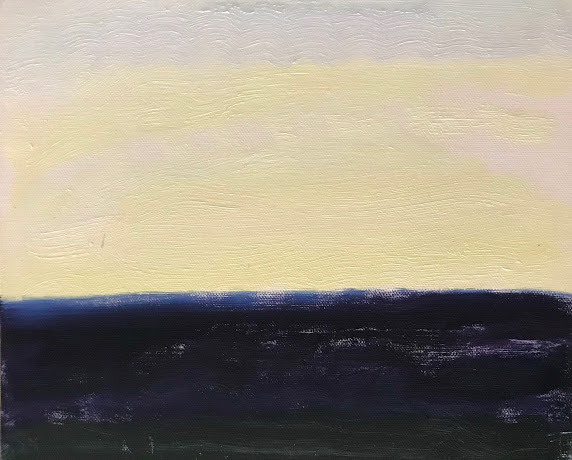 While preparing some paintings this morning it came to me that I may have been working from a concept instead of a vision. This is an interesting discussion.

I generally don't talk about Vision very much, somehow it seems too lofty an idea. At least it isn't in me to speak about myself using that noun. I would be more comfortable using the word concept when it comes to painting. And yet my hope be that at least some of my pictures were created out of a vision personal to myself.

Somehow the idea of concept feels to me a little more mechanical, cerebral even, as in conceptual, whereas vision somehow implies a sense of the mysterious, almost mystical perhaps.

I approached my work the other night with an idea in my head. I wanted to just make very, very quick studies one after the other. In fact, I made 5, one right after the other. I was willing to leave them in a fresh state, unfinished-looking, as if made by a 6 year old.

I was happy working with this idea in my mind because I  was aware of coming to the session with a concept which I accepted. They were not visionary, but the ensuing work which comes out of it might be in the future. For me, a vision comes through the work and the intuition which it subsequently engenders over time. In other words, a vision arrives over time from having worked on a motif at length. It arrives because of all the small failures and little adjustments one makes over time.

The two presented here closely resemble one another. Indeed they were probably done in sequence. Maybe the top one was painted just before the one below judging from the deepening yellow sky.

I am continually drawn to this citron yellow in the late afternoon before dusk even considers its arrival. There is this collision between the palest Prussian blue and the discreet yellow forming under it just over the horizon line. The sea has Prussian blue in it but also Ultramarine too. When I put too much Prussian blue in the sea, I look up again to see the sea suddenly begging me for Ultramarine and a touch more of Magenta. This is the most delicious part of working in front of a changing Nature. And this dialogue with the sky is a visual one and it has engaged me in conversation. That is why I paint from the Natural world. It is an escape from my self.

It is inexplicable to me that people would work from a photograph in order to render Nature. They are missing out on something quite magical. But that is another quibble for another time. 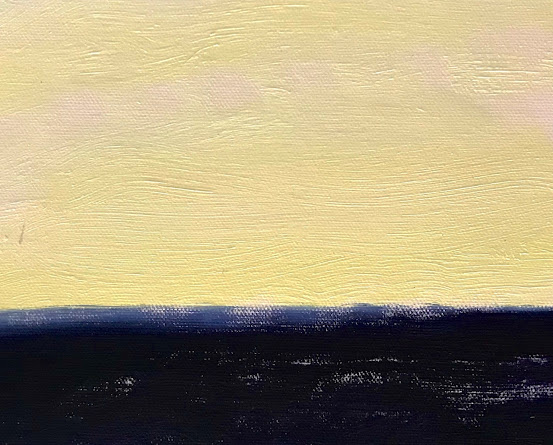