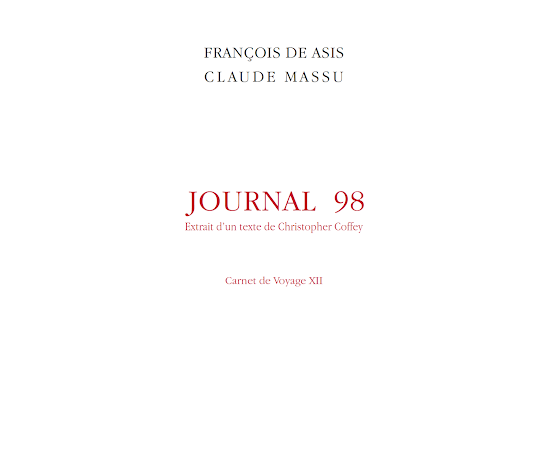 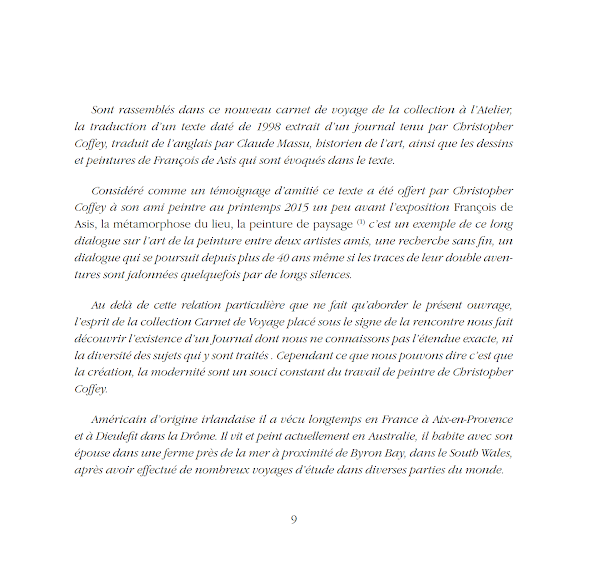 Went to see Francois last night. I wanted to read him a piece (en Français) which I had written about myself for the show in Mirmande at the Église St Fôy in September. He kindly helped me to rewrite the last paragraph which brings order to the whole thing. He liked it, and to my surprise, he found it well done, concise and original, loyal to my person, as the French say.

He added (regarding my own work) that the angel-like person flying in one of my paintings was in fact, no more ridiculous than angels flying overhead in the Giotto frescoes which he had seen in the slideshow at the school. I agreed because for me, the angels were just objects in space to help unify the picture plane. He said he had much preferred them in the Giotto fresco than in the seemingly endless blue sky of the Mantegna (crucifixion) also seen in the slideshow.

I went over on a drizzly Tuesday afternoon at noon. In his studio he was working on a serigraph plate for his project with Bonnefoy dressed in his sheepskin jacket, woolen sweater underneath, and his huge wooden clogs, the kind which one slides into completely like a boat with pointed toes.

He was painting the plastic sheet with a whitish tone; each sheet representing a different color for the lithographer. There would be maybe 10 or 12 of them per painting. He gestured to it and said with a smile:

“Voilà Giorgio Armani!” which he didn’t understand at first because of the way I had pronounced it, (but also because it seemed so out of left field.) Then foolishly I repeated:

I tried to explain that the oriental looking patterns on the sheet in pale lavender reminded me of the exotic, and beautiful textiles that Armani uses to make his coats and dresses....but, alas, he was already off onto another tangent.

On the wall were hung a few new paintings from Venice. He said that it had been the coldest, rainiest trip ever....almost every day: rain or drizzle, a bone chilling cold which infected him whenever he was outside on a motif.

There was painting of a ‘new motif’ from the Ca Rezzonico looking toward the Ca Foscari. I recognized it immediately because I often stayed there. I was fooled by the actual place however, thinking he had done it from the 2nd or 3rd floor, and wondering just how he had received permission to work from a balcony window. He had, actually done it from just on the other side of the building in a tiny spot to the right. What fooled me was just how much ‘vertical’ water he had managed to draw into the construction of the painting. It really looked as if done from above, not at the waterline. As cold as it was, he admitted that it was “passionnant”, adding “J’y retournerais toute de suite si je pouvais”. And, I could see that he meant it.

On the left of this was a ‘very abstract’ version, a later one in violets, pale greens, and yellows done very quickly, perhaps even in 20 minutes or so. At the moment (as I write this) I retain an image of it as an X-ray, but in color. It seemed to be a quick expressionistic vision of the bones, ligaments, and shreds of muscle in the motif itself.

On the right, a finished version, in fact, the very first one done after arriving in Venice....in his own words: “very impressionist”.

He had received a letter from Yves Bèrgery who is somewhere in Martinique. Francois had just replied to it and he read me both. Basically, what Yves said was that Nature was too big, (describing the view from where he was staying on a hilltop with a 360 degree view) and that he believed it impossible for anyone to work from it today, or do anything of it which would do justice to its scale. To me, it sounded like a rhetorical question, not knowing Yves very well. Francois agreed because he felt that deep down, Yves believed it was impossible to paint from Nature.

Francois read me his reply. One thing I remember he said was said that ‘anything could be done from Nature if one worked at it enough.’ and he went on.. ‘A solution could always be found in pictorial terms if one stayed with it long enough to tame it.’

I didn’t stay long as I wanted to let him get back to his work. Before I left though, he showed me a Saluté also done in no more than 40 minutes.... An exquisite thing!... yellow, violets, and a black Dogana! (the small white building at the the point of the lagoon which used to be the Customs Office, hence Dogana or Douanes in French)