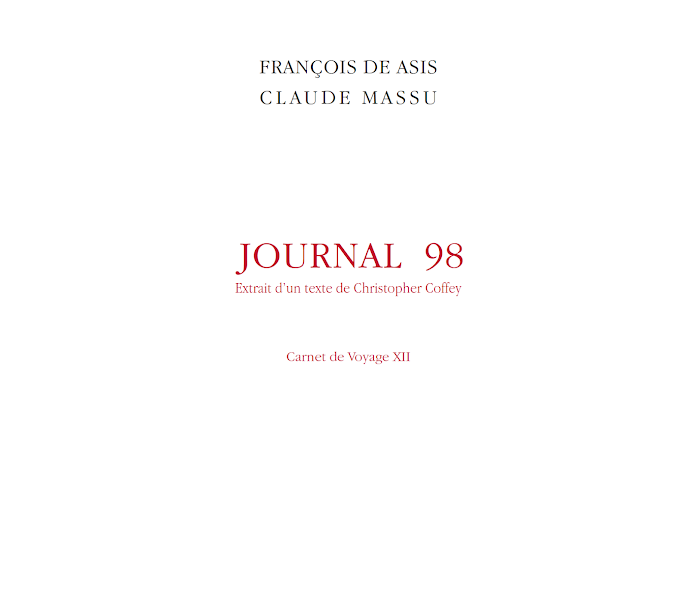 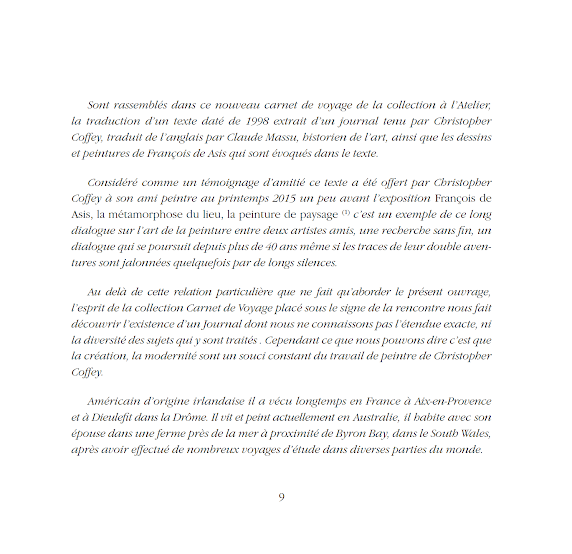 Went yesterday to say hello as I know he has passed by the Château twice since last week.

I found him drawing outside in his garden chair. Eliane close by him in a chaise lounge in the sun and reading. Francois was drawing the huge chestnut tree next to the house. Its flowers, large like ice-cream cones are hitting their zenith. I glanced at the sketchbook to see a wild and woolly circus of lines. I am beginning to notice a kind of symmetry in his drawing which indeed, one finds in Nature but only when really looking hard, I think to myself. Francois has tapped into it like a Japanese Zen painter of a time long ago when communion with Nature was essential for life as an artist. We chatted about my upcoming show.

His neighbor had cut down an immense pine tree some months earlier. The huge western sky caves in every afternoon. Such light which illuminates that entire portion of the terrace is stunning. Francois and Eliane are pleased. It changes everything.

We ambled down to the studio, the long lines of pale purple irises are still robust. In fact everything is alive,.. bursting with life.

In the studio he is working 6-8 hours a day on the serigraph prints for the book with Yves Bonnefoy. Its a cerebral kind of task which invigorates him, so he claims. Each plastic plate is lovingly painted to correspond to a color of his painting. How surprising that in fact his painting, so seemingly spontaneous and unruly, can dovetail into this rigorous print-making process. I always marvel at this concentrated mind. And I see in this just how much he had in common with Leo, whose own temperament was rigorously disciplined.

He showed me a copy of Poésie 98, the review by Yves Bèrgerey which he had just received in the mail. The text is beautifully interlaced with his drawings. Fantastic things! Drawings from Venice, Monterosso, the Alps... He seemed very pleased with it.

He then showed me an album from his first visit to the Alps where his series of the Large Boulder were done. They are squirrelly, seemingly random in explanation, as if his pencil had not been lifted off the page. They are dense with an intensity and relentless probing; crazy peregrinations. They seem obsessional.

His second visit seemed to dispel all the uncertainty of the first because with the greatest simplicity, he carved out images made with brevity. Where before, the thick surface-markings of lead obscure the structure of the drawing, now, the white paper dominates, as if the sun has come out and suddenly swept away the clouds. They are the results of deliberate movements between the hand and the eye..