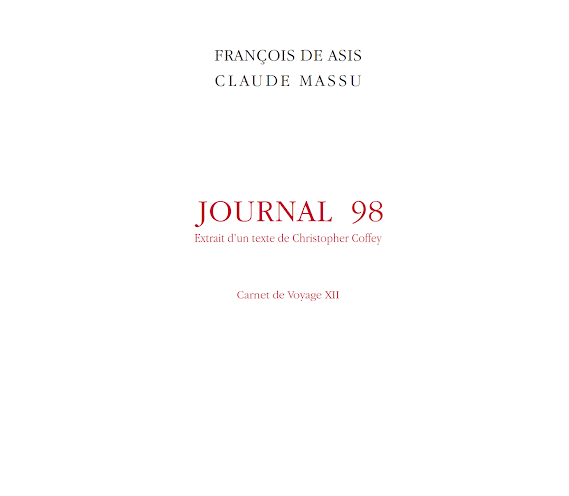 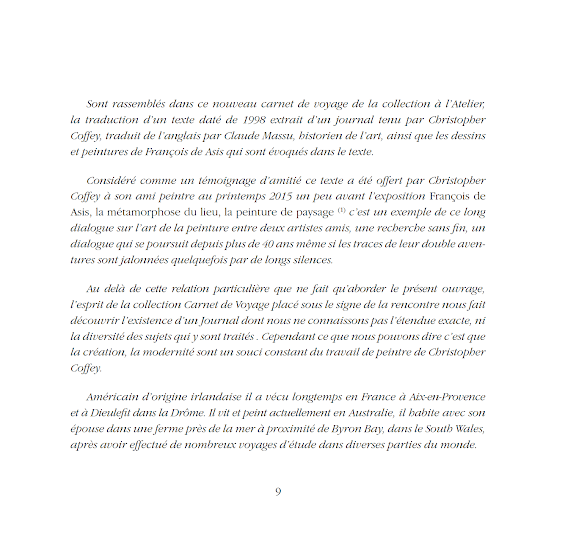 He came over to show me proofs just recently pulled for his new book. He wanted to explain just how he worked up these serigraphs as opposed to his paintings. He said he had no interest in simply reproducing these drawings. He doesn’t have the time, nor would he want to waste time, they are simply done, finished, and he moves forward. For him, the serigraphs represent a new and unique ‘interpretation’ of his own paintings.

He interprets each painting by way of many different plates of color. Each one is drawn uniquely for the serigraph. (I think of Leo’s way of making his lithos) They are done with a brush which ‘brings them close’ in feeling to his painting but they are done in monochrome, the colors added later.

I went yesterday for a visit. Eliane was sitting in the garden at the table writing some letters. Francois and I went down to the studio which was cluttered with canvases everywhere one looked (more and more!). He had had a good trip to Monterosso and it had been very productive. He was happy, and it showed.... he seemed younger.

He started off showing me the early morning motifs most of which were charged and turbulent. He said that during the whole time in Italy there were only 3 or 4 days when the sea was calm. They are all about size 15F, maybe 20F, and all were done in one session. He explained that he worked every morning from 7h - 10h30. Only after, would he then ‘faire sa toilette’ and have breakfast with Eliane. He seems to work like a diesel engine, always steady and always plowing forward through any doubts or concerns.

One of the canvases was done in a rainstorm which drenched him, and he caught a strep throat. It was a thing of rare beauty, cold emerald green water below violet mountains.

He described these things as ‘le couleur du tableau’ as opposed to the ‘couleur local’.

I could see immediately that all these things came out of his experience with the serigraphs. In fact, some of them looked as if they could almost have been serigraphs. He admitted that they were ‘born from his books’. They looked like colored drawings to me. He showed me some smaller things done from the balcony of his hotel.

Afterwards, we looked at three paintings from a two week stay at Stephane’s in Forcalquier. He wasn’t satisfied with the results. They were huge, I don’t know what size; maybe 70F or 80F..?

I loved them even before he had a chance to straighten them up on the easil. I could see something which was directly close to me... to my sensibility, an emotional feeling I am after perhaps.

They were tremendous images, completely abstract, done of the plateau.. Incredible that someone could pull off such an image from this landscape. He described them as being “scattered with color” not unlike the “couleur du tableau” of which he was speaking earlier. The “couleur du tableau” is done from the sensation, almost a memory, he explained again.

He spends at least an hour preparing his colors before he begins, hence the clarity and organization which I sense in his work. And yet, the crazy, wild brushstrokes, so spontaneous in much his work, seem to contradict the careful planning. I am not sure that most people would share my admiration. He is moving into a realm of Art where few can follow.