plastics in the Hall of Versailles

Making Art is an American concept. I don’t think anyone anywhere else has ever referred to Art being made in quite the same way. It seems to be part of the vast vernacular of the America landscape. I always feel a bit relieved that I see myself as just a painter who paints pictures. I don’t make Art, thankfully.

Painting pictures is an easier, a less melodramatic activity. I have always felt a little sorry for really famous contemporary artists who must continually re-invent themselves each couple of seasons in order to please an audience of investment bankers and others on top of the food chain.

Also, there is something grotesque about American Hubris in every regard except that it is worse in Art in the world of Art-Making where America promotes itself as the Biggest, the Best, the Boldest, and the most Expensive.

There is an innovative animal in the American spirit for both the good and the bad in our enterprises. It's if it doesn’t matter what is made, but it needs to be made! (And I am not even talking about the current president who, in this regard is in a class by himself) I have often felt that we are in an extremely materialist phase at this moment in time. It's not that Versailles is parked in our living rooms but in our gluttonous minds.

Over the last century the world has produced many things which have improved our lives. Plastics come to mind, as one example. Yet for all its benefits, of which there are so many, it has after decades of existence also infected our lands, oceans, and waterways not only into every corner of the earth but into almost every microscopic tissue in every mammal and fish on the planet. So melodramatic am I! But it's nevertheless true. And for all the good of industrialisation in our manufacturing, we are left a century later with a hotter planet, and too few cool heads to try and fix ameliorate our situation.

So what has this got to do with Art? I would postulate that as we assess our carbon imprint upon the planet it behooves us to also try and understand the impact of what our Art has on others.

Does it make an attempt to connect to others with whom we share this community in both the small and and large senses? Or, is it all solipsistic navel gazing? And personally speaking, I have been guilty of that myself, so I am not throwing stones at the mirrors in the Hall of Versailles.

What interests me intellectually anyway, is what our creative contemporary culture thinks when it makes Art as an activity and livelihood.

So after that rant, I will offer up a very small painting to contrast with those large ideas which I seem to be clever at juggling upwards into the air but inept at catching as they fall. 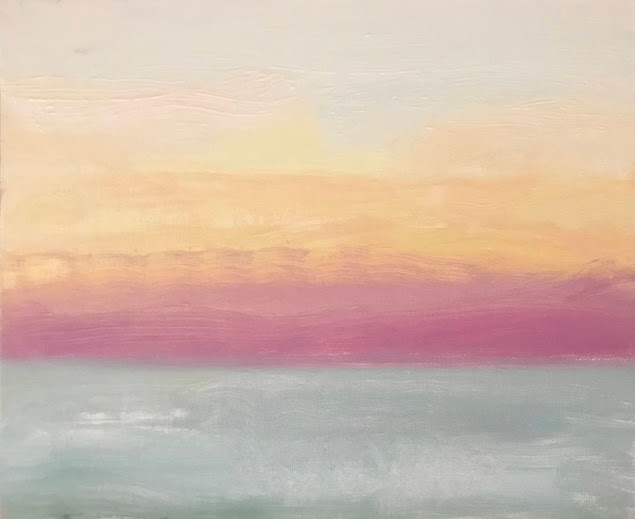