Proust and the Time Machine

I have the dubious luxury of possessing a few old photos of myself from boarding days which my father had lovingly framed and had hung on his bathroom  walls at the Westbury Hotel where he lived for about a dozen years waiting for my mother to change her mind. 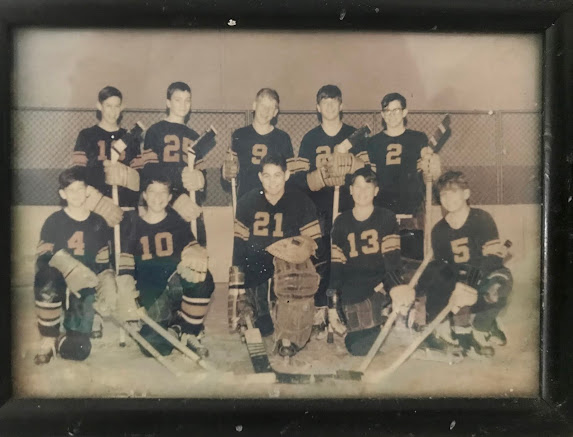 I have a few framed photos of various hockey and football teams from different schools. I look at them now almost vicariously as if from another life time. It's another small body, but that is in fact me even if it is no longer a small young body. The photos have been shuffled about from New York to France, and now they find a home in Australia. I haven't yet hung them up anywhere. They have been orphans mostly propped up in different bathrooms of mine over the years. Starting out at the Westbury Hotel (where the arch-villain in The French Connection was filmed staying), they are reminders to me to never wait for a woman to change her mind. For that matter, never wait on a woman. She had moved on while he hadn't. This is a theme of men and women, it seems, though naturally as a child I was clueless. Meanwhile these photos have become used to waiting around in new and different shaped bathrooms over the years, on different continents, but always bathrooms nonetheless as I remain loyal to that idea alone.

And looking at them recently as I brush my teeth or perform some other bathroom ritual I find myself trying to remember my teammate's names. And weirdly, I can almost remember all of them despite that I can barely remember the name of my current neighbour whom I see often. But these names are glued to distinct memories far beyond the vast desert of what became of my adult life. And of these ghosts I can sometimes pin a first name or family name, and sometimes both. It feels like using Time Machine on my laptop where clicking onto those faces draws up to the murky surface of the present those sepia memories reaching far back into the past.

Last year I read Swann's Way, the first in Proust's winding path down through his own memory lane and to the first bite of the infamous Madeleine with his grandmother.  We all have them, these elegiac lightning strikes at most odd moments in our often odd days, these odd memories.

Let's see: in the back row starting from the left is Brad Gifford, the next is a blank, Me number 9 in the middle, Charlie Baker, Seqriest Front row: John Lee, Charlie Ebles, Kristopherson the goalie, Belucci, and Greg Bloomfield on the far right.

The photo itself has faded terribly which shows its age. It was the Junior Varsity Hockey team and it was taken in Deerfield Mass. In it, we are all laughing because I remember the photographer had cracked  a  joke to make us smile. (a lesson I learned well, and stored for later in life when taking my own photographs of uptight or shy sitters) I like that I am smiling broadly in this photo circa, 1965, because I somehow lost that smile as I went into the rest of my adolescence and adult life.