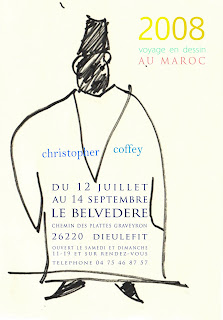 I had to run to town this afternoon rather late. The sky was a magnificent blood red orange painted on the clouds as far as the eye could see. I was suffering from low self-esteem (la merde quoi) due to difficulties with trying to finish some paintings which are behaving like a classroom full of three year olds. If I were in New York I would go to the Met on such a day when confusion reigns in my mind,.... when I hardly seem to be alive. Instead, because I live in the country, I went to the local hardware store to pick up sunflowers seeds, for the birds! ha ha! Afterwards, to pick up a few things at a shop, and still feeling quite sorry for myself, I began looking into the shop windows (les vitrines). Suddenly, I saw a big dog staring out at me from out of an apartment on street level. I went over to say hello to this remarkable looking creature which began smiling as I approached. Then just as curiously, I noticed that just above and beyond the dog's thick ears, something strangely familiar. On the far wall was a poster from a show of mine two years ago. It was framed. It was such a pleasant surprise that all my dark feelings simply evaporated on the spot, just like the afternoon clouds!


My God! I seemed to exist after all.


As Cole Porter wrote: It was just one of those things, actually.
Posted by cloudsandsea at 10.12.09