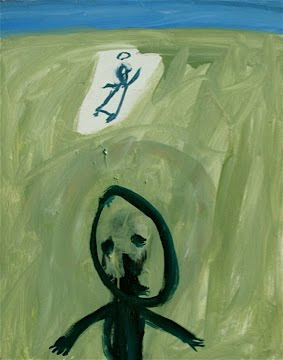 50 X 40 cm 1995
The Christmas season can be unsettling. I have felt, like so many other adults, a sense of anxious deja vu, but each year I remember and recognize it for what it is. I was invited to my friends at Le Parol. The dear couple and their grown up sons (Les Baches from Lyon) welcomed me for a leisurely lunch of salmon and salad, quite civilized really. We began speaking of number of different things which eventually led us to books and films which is where most conversations usually take people around a dinner table. I had just watched The Reader which the mother Marie had read, and which Bazille, the eldest son had also seen. She loved the book while he didn't appreciate the film very much. As I had liked it, on the other hand, I was curious why it had displeased him so. I think he felt that the character was ill-defined but nonetheless, it guided our conversation over to the delicate landscape where good and evil co-exist in human lives. I don't remember how, but I began speaking of my own "mean streak" which I hide deep within me and which comes out periodically. When it does I am always shocked, but at the same time quite amazed (étonné). I am also amazed at my own ability to broach such intimate subjects, but then this is somewhat new, my lack of pudeur, as it were. I confessed (to my even greater surprise as the French are distinctly reserved) that I assassinate my friends in the most discrete manner which afterwards leaves me disgusted with myself. I finished my Christmas confession by saying that it is a behavior which I urgently need to change. Gossip is a dreadful habit of the tongue.