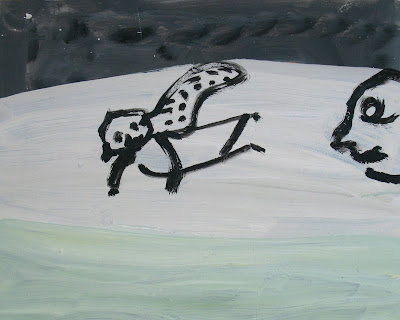 I have been reading about writers the past week, notably, a book entitled The Agony and the Ego. In it are portraits drawn up by two dozen writers themselves. I have read it several times before but always go back to it when I am looking for inspiration. The following from Lorrie Moore which I found most interesting:

What constitutes tragedy and what constitutes comedy may be a fuzzy matter. The comedienne Joan Rivers has said that there isn't any suffering that's one's own that isn't also potentially very funny. Delmore Schwartz claimed that the only way anyone could understand Hamlet was to assume right from the start that all the characters were roaring drunk. I often think of an acquaintance of mine who is also a writer and whom I ran into once in a bookstore. We exchanged hellos, and when I asked her what she was working on these days, she said, "Well, I was working on a long comic novel, but then in the middle of the summer my husband had a terrible accident with an electric saw and lost three of his fingers. It left us so sad and shaken that when I returned to writing, my comic novel kept getting droopier, darker and sadder and depressing. So I scrapped it, and started writing a novel about a man who loses three fingers in an accident with a saw, and that,' she said, 'that's turning out to be really funny.'