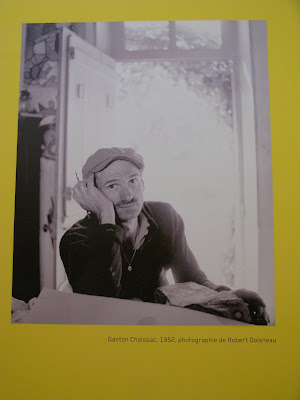 Yesterday to Grenoble where I stayed the night at Reidunn and Jacques. A small dinner party which was fun. Present were Nicholas and Sophie, both artists who work in glass from the Vercors1, also came Nancy, a neighbor in La Tronche2, a British women wearing a very strong scent of Chanel's perfume 'Coco". Towards the end of dinner, Nancy asked for something to put around her shoulders as it was slightly nippy3 in the kitchen. Nicholas quickly gave her his pullover which she put on as we prepared for desert. About midnight, everyone eventually faded and went home.

Today, to a show at the Musée de Grenoble devoted to the work of Gaston Chaissac. The photo above of him by Robert Doisneau is a beauty. What a handsome and gentle looking soul! Reidunn works there giving guided tours when she is not blowing glass herself in the Vercors. On this morning, she had volunteered to give a guided tour for a group of friend's children, including those of Nicholas and Sophie. In all there were about ten kids4. She did wonderfully which didn't surprise any of us. For about an hour she walked us through a colorful show of paintings and sculpture. Meanwhile, Nicholas was wearing the pullover which he had lent last night, freshly imbued with the scent of her perfume. Wherever he went, in front of every painting and sculpture hung the aroma of Nancy like an invisible cloud.

Below, a tiny film.

2. a neighborhood of Grenoble