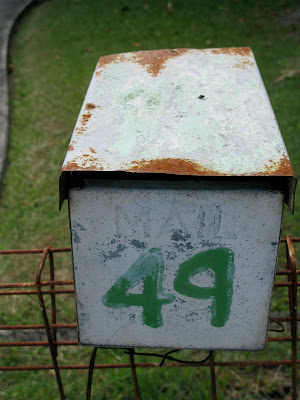 Its been almost a month since leaving civilization  I have (gone troppo) as they say in here in Australia, (gone bush) as they also say. I have left my senses in Europe! In truth, I have been spending too much time in cafes meeting different friends here and there, speaking of this and that.....re-learning the Australian language, usually that. In fact, I should really become more serious; (more conchy), if I want to return back to France with some decent work to show this summer. I have been filming my friend John Foss (aka Giacomo Fosscatti) who designs and builds motorized bicycles. He wants to put a small film clip to his web site of the new Billinudgel Bullet Flyer cruising through the Eucalyptus forests. Into the turns, knee extended out like a motorcycle racer from the fifties, he is flat out (like a lizard drinking).

But at the end of most afternoons I put on my bathing suit (budgie smugglers) and jump into the sea. There are often lots of surfers so one has to be careful, especially to avoid the novices (shark biscuits), a young boy of thirteen had his poor head cracked open last week here in Byron by a (shark biscuit) with a pointed surfboard. This raised the intellectual discussion around here of whether or not one really needs a pointed surfboard anyway?....

Two days ago was Australia Day, a day for national celebration, kind of like Bastille day, but without the Bastille (or anything to do with any of kind of revolution, as this is still a Monarchy, in theory anyway) A day of family picnics and fun. Also a day of drinking, excessive often, when mobs of hooligans (yobbos) dress up in Union Jack to go out and harass dark-skinned people. Its a kind of a National shame for everyone else, civilized or not. This happens even in the best and most open cultures, helas!

So, last night I stopped in a pub and had something cold before going home. Curious to see who was winning the Tennis match in Melbourne between the Frenchman and the the Serb. The pub was mostly empty, but of the two or three clients at the bar, I knew one of them who works in the local hardware store. A nice guy (bloke) wanted to buy me a beer (shout me) but as I don't drink I accepted a lime and bitters. He and his buddy were both a little drunk but in a friendly sort of way. They asked me what I got up to for Australia Day. Being a bit of a prankster (larrikin) I replied that I put dark shoe polish on my face, went out, and kicked some Aussie ass all day!! They nearly fell off their barstools. Fortunately though, they didn't know quite what to make of me so they laughed. In another kind of town I might not have made it out the door alive.