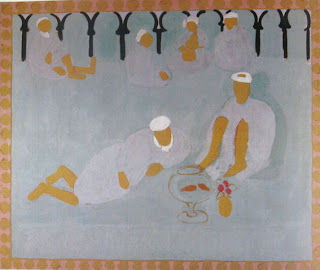 I have been reading a biography of Henri Matisse by the British writer Hilary Spurling. I picked up the second of two volumes covering his life from 1909-1954 (from when he was 40 years of age to his death). Its such a great read and I highly recommend it to anyone who loves those years before and after the two world wars know as Modern Art. That admiration, I confess, to have come to it late in my life. I have always loved the work of the lesser known artists of the south of France: Charles Camoin, Albert Marquet, Henri manguin, Raoul Dufy, the early Derains of what was to be know as Les Fauves. But I was suspicious Matisse!
Mostly, I didn't like his stiff drawings which seemed academic and awkward after seeing so much lyricism in the drawings of Albert Marquet. So I come humbly to him with my paintbrush lodged between my arrogance  and my legs.
Posted by cloudsandsea at 19.2.10