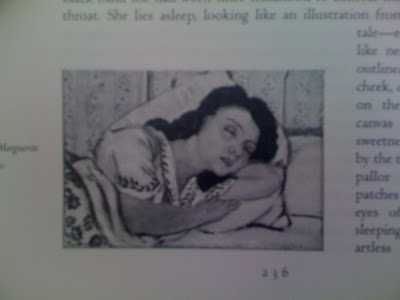 Awful, but my camera is at the repair shop, otherwise, I would have a better picture of this page from Matisse's biography which I meander through at a snail's pace (mais quel plaisir!).
Matisse painted this exquisite picture of his daughter while she rested after a rather large surgery to her throat. She had been plagued with a constriction of the air passage since her infant days enduring endless procedures over her life to repeatedly open it. A remarkably stoic young woman, she was her father's greatest critic, and a painter herself.
'Margueritte's recovery was the family priority that summer. As soon as her doctors let her leave Paris, Matisse took his wife and daughter to recuperate in sea air at Etretat in Normandy on the channel coast. They booked into a beach hotel for a month. Matisse produced rapid oil sketches of exultant vitality, painting the boats, the sea front and the bay with its curious cliff formation that had appealed to so many of his predecessors. "I've been at Etretat for two weeks now amid green-topped white cliffs beside a tender blue and turquoise green sea." he wrote on the 20th of July to his Nice companion, Jules Romains, "from which I can see emerging superb creamy white turbots, iron-grey dogfish, lesser spotted dogfish and skate, skate all over the harbour." He bought the pick of the daily catch, paying a boy to water the fish from a bucket while they poised for him, and tipping them back into the sea afterwards. The sleek, lithe, powerful creatures in his canvases, thrashing their gleaming tails on beds of seaweed, are as energetic and alert as the painter himself. "They are amazing," wrote Roger Fry who saw a batch of these fish pictures on show in October at Bernheim-Jeune. "His certainty and invention are almost uncanny. They're almost intoxicating to look at."
'But the canvas that reveals most about Matisse's feelings at Etretat is a little painting of Margueritte, whose exhaustion was frightening. After living under the threat for so long, she allowed herself to collapse at last and be put to bed, where her father painted her for the first time without the black band she had worn since childhood to conceal the opening in her throat. She lies asleep. looking like an illustration from a child's fairy tale-- rounded swan-like neck, long lashes outlined on a pale cheek, dark hair spread on the pillow-- in a canvas whose surface sweetness is undercut by the troubling mauve pallor and the dark patches curling the eyes of this real-life sleeping beauty. Portrait of Margueritte Asleep contains the same fierce emotion as the first picture Matisse ever made of his daughter, the 1901 Portrait showing her as a vulnerable six-year-old with staring black eyes in a white face. When they got back to Paris in August, Henri and Amelie hung the new painting over their bed".
From Matisse, The Master by Hilary Spurling
Meanwhile, here in Australia on the North Coast, the weather is capriciously silly.
It rains perhaps 30 times each day and night in between great bouts of blue sky and black skies filled with stars.


I keep busy painting. I leave in 6 weeks back to France.
Posted by cloudsandsea at 16.3.10