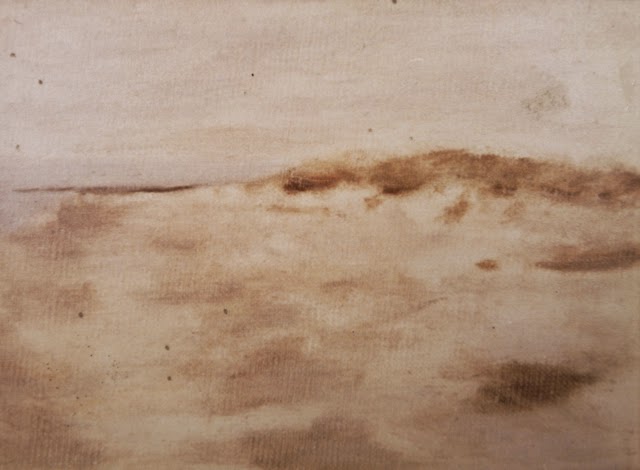 I came across this old photograph from the late 1970's of a very small painting I had made on South Beach at Fisher's Island NY circa 1975. Actually, I think I gave it to François de Asis shortly thereafter. What surprises me is that in it are essential elements of what I am still after 40 years later. It is a surprise to see that I was as interested in a kind of 'emptiness' then, as now. Actually, in those days, I felt invisible in my personal life, so it is not surprising that it 'fit ' with my growing obsession of unobtrusive images. It isn't just made up of such minimal means of paint. But too, a drawing which appeared like a phantom made of just sand and wind alone. It is a dune with a small jetty at the end which separates it from the palest of skies. The 'light' in the sand just below the accent of the jetty is stronger than the pale sea and  heavy sky hanging overhead which giving it tension. Funny that I not only like this small painting, but I am moved that it was given to me to make.