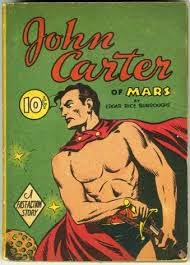 I know,... I know, yes, it was panned by the press when it came out, and it was ridiculed by many, but I take the contrarian view after watching it the other night. Expecting a joke, I was pleasantly surprised because, as a crazy film adventure, it actually works in an even crazier way. I think it is saved by its own natural camp, and its lack of any pretension which seems to haunt so many sci-fi films of recent years. Nor does it suffer from that moronic sentimentality which plagued The Lord of the Rings (and neither, does it generate a headache from so much CGI (computer generated graphics) which left me feeling dizzy and cheapened watching it).

I could never make it through Star Wars so many years ago because I also found it so moronic but in that dreadfully smug Hollywood kind of way. It had a kind of antiseptic chilliness about it which never touched me.
Too very slick like so much from Hollywood. And yet, I know that the story was supposed to be one of heroic Greek stuff lauded by the great Joseph Campbell, but, non! non! de tout!

Now, John Carter does not pretend to be a anything but a romp; a weird campy lark between comic book pages so unabashedly stolen from another era completely. The story is so wacky that it actually works. It manages to pass through unscathed, that delicate and surreal zone which can make or brake our tolerance in Sci-Fi. I found myself completely unhinged from reality after just 10 minutes into it. Embracing its abstraction it stays true to its B-movie integrity. I think what really saves it from many possible disasters is that the main characters play it cool and, they have a certain likable charisma, not a wink, but a subtle smile to the audience (and each other) as if to say: "Isn't this pretty wild and crazy?" without an cheekiness visible.

So, my advice is to watch it with the kids, or just alone, with a large bowl of chocolate ice cream, fudge, and sprinkles on top.