Mallarmé and the effect of dusk on a man's soul. 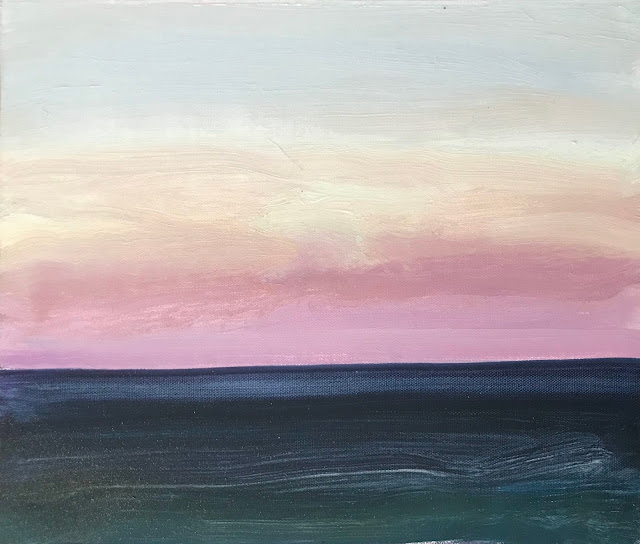 I am not sure which painting (or painter) Mallarmé was thinking of when he made the following observation, (to paraphrase)

"to paint not the object but the effect it produces might be the essence Modern Painting."

I am always looking at Turner's watercolours which have probably been the biggest inspiration for this series done in Australia.

With lighting speed I chase after these 'effects' of Nature at the end of the day and before nightfall.

I am more Expressionist than Impressionist. I have already re-iterated this many times over the last few years in these pages. But, I say it again because after both French Impressionism and American Expressionism came a tsunami of copiers, ('followers of', to be less harsh). But still, like after every great new innovation in the Arts, what follows is almost always an imitation of the real thing. Painters develop strong techniques (effects) to compensate for a lack of vision based in personal memory.

I am not an adherent of American Expressionism but I am an adherent of speed, of painting quickly, without hesitation, without monkey mind, and mostly without the cursed 'attention to 'nice painting effects'; the plague of the Painting world. I attack a motif like a scorpion once I have seen something in it with my eyes. From then on, I break down the pillars of my own thought and constraint, and the messiness left at the end of the short session is the picture. These studies rarely take more than 10 or 15 minutes.

My attention is always focussed upon the canvas board and the unified pictorial image which does not rely on the tricks of the trade in the Painting world at large. And yet, on occasion I can fall into propping up a picture using any means necessary to bring off a painting.

This same thing happens in the world of Jazz. Followers still imitate the great innovators (with great technique) but turning so much of contemporary Jazz music into pablum. Another time to explore this idea which will upset most people.