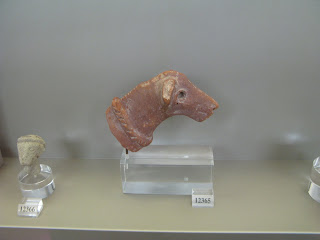 Tonight, to dinner at my friend Joyce. She and her husband bought a chateau two years ago. Its perched (perché) atop a small hamlet of houses not far from Crest here in the Drôme. He is often away on business (les affaires) but she loves it so much there that she stays at home to paint, among many other things. She is currently finishing a portrait of the mason's wife (le maçon) who enlarged (élargi) one of her many windows. Apparently, he liked her work so much that he asked to make a trade (un troc):


his work on her window for her portrait of his wife.


I saw it tonight and I imagined that any stonemason would find it a fine thing to hang (accroché) in his home. She came to sit several times, then did the cleaning as she is also the housekeeper. This is a much nicer job description than (femme de ménage).  The portrait is well done with an emphasis on likeness, which I thought successful from what I could see from a few photos which she had left Joyce.

Joyce has acquired two dogs from a neighbor's son. The fellow had died and the son couldn't keep the dogs. These are hunting dogs (chiens de chasse) which have only known life from inside of a steel (acier) cage. To say they are timid would be a great understatement. When I am present they spend all their time hiding behind chairs. Unfortunately for me, it wouldn't be an overstatement to say that my nose (mon nez) goes ballistic around most dogs for I have an allergy to many animals, furry (poilu), and otherwise. Its been that way since I was a kid. One day, from elementary school, I was sent to the hospital because my face had swelled (gonflé) up like a grapefruit. My mother was called to pick me, and she dutifully showed up at the hospital. The doctor (médecin) said quite simply that I could not, should not, under any circumstances be around animals. This was a tough call for my mother, as she had about twenty dogs, most of which were kept in the back kennel. She was quite attached to the idea of having dogs. The lucky ones (les fortunés) lived in the house. But she nodded to the doctor and we left the hospital. No sooner had the car found its way out of the grounds when my mother said:


"Tough luck kid (tant pis), you better get used to it, because the dogs aren't going anywhere."