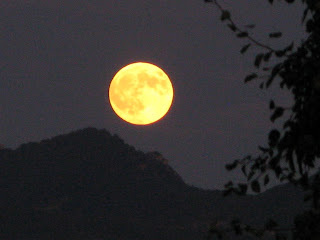 I drove to Valréas this late afternoon. For parts of the way, the road was filled with autumnal confetti (confettis d'automne) as if a wedding party had lasted 22 kilometers. I had decided to go to the gym (gymnase) because I was feeling blue (bleu). Its one of several tricks I play on myself to change my mind. Sometimes its a long walk in the woods (le forêt), at others, just a good book, but today it was the gym which is a twenty minute drive. Its a beautiful road which winds through a set of valleys then opens up (ouvre) and one can see all the way to the Mont Ventoux which devours lots of bicycle enthusiasts each summer. To the west are the hills of the Ardêche which turn violet towards the end of the day, in any season. At the gym, in the toilette (unisex) there are several printed messages scotched to the wall above, they read:

(Because you cannot behave like adults chewing gum is now formally forbidden in the gym!)

That was pretty clear but the next one took me for a short spin in my brain:

(Do not do here what you do not do at home!)

it was signed on the bottom right:   Céline

Now (Or), was it because I had just seen an old interview with him on television that I thought Céline wrote this?


Driving home a large full moon (la lune) greeted me. My blues (coup de cafard) hadn't quite left me but then on the radio came the op 118 intermezzo of Brahms, and I kind of melted (fondu) all the way home.