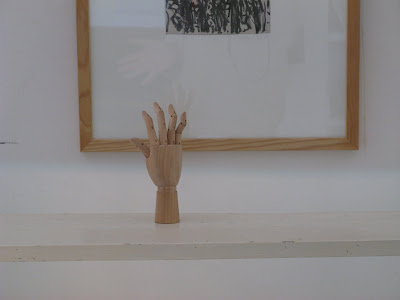 Henri's hand is what everyone is talking about here in France, as well as perhaps all over the world. The famous "hand of god" which assured France's place in the world cup. I confess that I didn't watch the match but I saw the infamous replay a zillion times on the television. It always makes one wonder just how one would react in the same situation. Would I have turned around and said to the line referee (l'arbitre) that I had just used my left hand to pass the ball?
Henri is a professional and called it like he did. He's probably an honest guy, and knows better but he made a bad decision, one for which he will be remembered, for the rest of his days. Helas! (think Zidane)

"En moins d'un tour de main, cela s'accomplissait"
La Fontaine
(in less than the turn of a hand, it was accomplished)

This hand business brings to mind a documentary which I saw a few years ago. It was devoted to Anish Kapoor and his immense project (projet) in Belgium at the (Grand-Hornu). For some odd, but wonderful reason, Belgians (Les Belges) go bananas for Contemporary Art.

In this film, he basically says that "the hand of the artist is overrated in this day and age. Its a romantic notion which is outdated, that nowadays, Art is made solely with the mind". [sic]

Well, maybe for him, because in the film an army of workers are erecting his huge piece (grand morceau) behind him as he speaks into the camera. I had the image of an Egyptian Pharaoh pontificating in front of his pyramids.

Now, actually, I like some of Kapoor's work, but his dialogue is elitist and most unfortunate to say the least. One often hears this same refrain from many others in the Contemporary Art world, but its usually couched (caché) in much more subtle terms. What I find so evident is that without this human appendage, art cannot exist. While watching his pronouncements I couldn't help but think of Chopin and Van Gogh, or Delacroix and Keith Jarrett.

(His hands were those of a laborer, untiring, huge, thick and wrinkled with deep cuts.)