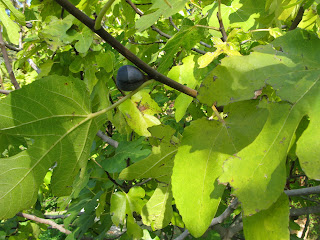 Somehow, the dying (mourante) leaves of the fig tree make me think of Cinderella. I have no idea why. They are turning a kind of golden (dorée) citron color but many of the leaves have already fallen. The very last figs look succulent (savoureuse) but lack much taste. I eat them dutifully as if out of loyalty (fidélité) more than anything else, except perhaps to prolong the summer-like days which rest in my imagination. Like a child, I seem to want to prolong everything which pleases me. Its always been that way. I still wear shorts when it is already too cold to do so. The townspeople look at me with surprise when I do my errands. I sleep with the doors wide open as if waiting for the moon to arrive for a friendly chat each night (tête-à-tête).


Today was the New York City Marathon. I ran it 5 times, and still marvel at the force of my memory (souvenir). It was almost twenty years ago that I ran  my first one. Right now, its 22:25 in France, I think of all those runners coming in at 4:25 pm in Central Park which is now an ocean of physical activity, a zoo of bodies. Each year on the first Sunday of November I think about it no matter where I am in the world. I stop my life for a few hours out of loyalty for a memory. I reminisce (évoquant ce souvenir) those increasingly long and hard kilometers at the end of the race; the incredible relief when it was over. I would make my way home and jump in the bathtub (baignoire). Later, I would take friends out for sushi. It was a ritual. By 10 pm, we would have been drinking lots of sake. I would be tired, but happy, wishing to prolong the evening but quietly taking care of the check, then sneaking out (m'éclipsant) into the city night and wishing for a pumpkin carriage to whisk me (escamote) home with great speed.