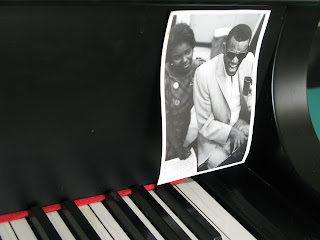 Its saturday night and I am home in front of the piano where few bachelors (célibataires) should be I suppose. In any event, I started playing very late in life. When I was 12, I wanted to begin but I thought I was too old. In school, at 15, I wanted (desperately) to find a meaningful voice inside of me but I gave up again as I thought it was too late. My teacher, Mrs Swift wasn't unhappy with my decision. In college at 20, I (most definitely) wanted to fill my dissatisfied life. But yet again, my persistence was nonexistence. At 32, I finally said "Merde" and


I bought myself an inexpensive (bon marché) upright.


Its been an uphill climb ever since. I haven't worked as hard as I wish I had, but I have learned a lot about myself, and a little about Music. I have memorized some Bach, Chopin, Satie and Shumman, but really love the Standards, so I have embarked on learning Harmony which means lots of scales. I am crazy about Rogers and Hart, Jerome Kern, Cole Porter and many others long forgotten. I once went out with a woman in New York who told me she was warned (en état d'alerte) by her mother that any guy who liked Show Tunes had to be gay! Ha ha!


This is Zoé playing Debussy.