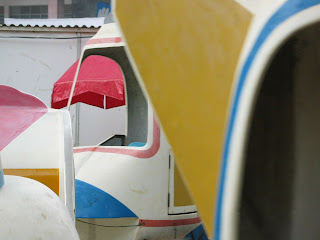 For the last few weeks I have been thinking about a remark (remarque) made by the late American painter Elizabeth Murray. In an interview somewhere she said (and I paraphrase from memory):

"Just because you, as an artist, think that your path (chemin) is the right one, it doesn't make other artists wrong"

I have contemplated that for the last few years since I came across it. Personally, I have been plagued by a pontificating (pontifier) spirit living inside of me like a untamed (non apprivoiser) dragon. Enough I say, I want to be done with it. I was mentioning it to someone the other day and she quickly said:

"Well, you might want to think of it in another way as well: 'Just because they are right doesn't make you wrong!"

She knows me too well. But, it's this thing of criticizing others, fellow artists in fact, which can be so boring. I loathe (detester) it when I hear others do it, and yet, I am the King of Criticism, and I hate myself for being thus!


I remember watching Coltrane once, speaking in an interview, he was being asked his opinion on what fellow artists were doing, this, that, the other (patta-ti patta-ta), etc.. He was totally cool.