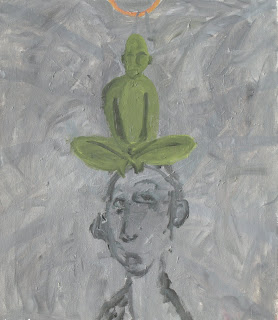 The weather (le temps) is turning. We have been blessed with the warmest days but as the guy who sells melons in the Aix market sings each september: All good things must come to an end! (Toute les bonne chose ont une fin!)

Tonight on the news: High school students (les lycéens) sent an anonymous letter to the principal demanding that their English teacher (prof d'Anglais) be replaced because she scolds them for using their telephones (les portables) during the class. hello?
Those interviewed outside the school (who wouldn't admit to participating) found nothing wrong with it Sacrée France!
On Antenne 2 this evening; a story about a farmer (I forget where) who hung himself in the barn (la grange) a few months ago. Like practically everywhere else in Europe, their farm has been in great financial difficulty. They had been living on 1000 euro a month for the past year. His wife has sold off the cows, tractors and remaining material. She will now look for work outside to support her three children. She still cannot go anywhere near the barn.
In the middle of the news I get a call from a friend in the States (a multi-millionaire) who laments the difficulty of making a living in the current market.(!)
Lastly on the, an item which surprised me was about a man who, in a coma, was misdiagnosed for 23 years, the doctors thinking he was brain dead. His mother, (bless her heart) knew all along that her son was conscious but the doctors would have none of it. Now, although still completely paralyzed, he writes with the aid of a nurse and a tablet keyboard (clavier). He writes practically nonstop, expressing his gratitude for finally (enfin) being able to communicate.