Prussian Blue, I love you in Harry's Bar 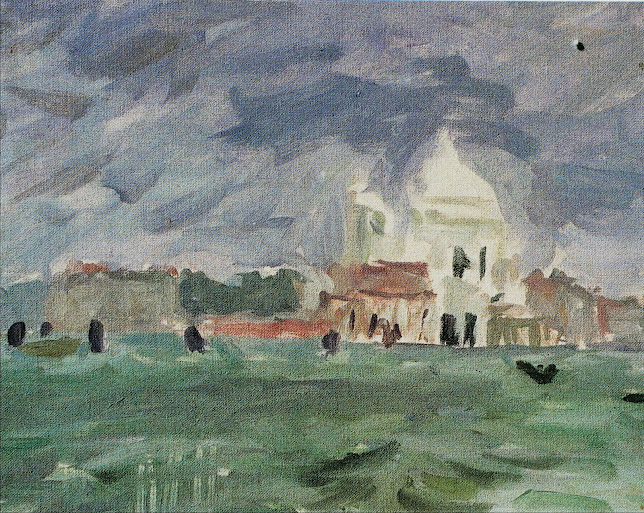 Salute, 1985, oil on canvas board, 35 X 27 cm
The vaporettos of Venice are as crowded at rush hour as any buses in New York, Paris or London. Everyone is packed tight like sardines in these boats. In Venice, the vaporetto churn and sway, pushed around by other sea traffic much the same as a New York subway car.
Many years ago when I used to go to Venice to paint I carried an old army pack which housed my paints, turps, brushes, and such. I also attached the laminate palette to the army pack so it hung off the back. At that time I didn't remove the slabs of oil paint from my palette, I cleaned only the large surface of it while leaving the swabs of colours hanging in thick splotches. So in transit, the primary colours were left to fend for themselves on the palette like sherpas on a mountain face. It was a stupid way of operating and I was kind of aware of it too.
One late afternoon I was on the vaporetto on my way to the Gardens to paint San Giorgio at sunset. I had gotten on a vaporetto at Accademia heading East towards San Mark's and it was loaded with a great variety of fellow commuters; shopkeepers, tradespeople, maids, tourists, business types, glamorous couples, and everyone else. I was seated on the right side and people were pushed up tight around me. My bag pack was on my lap with the palette facing away from me, out towards the world. 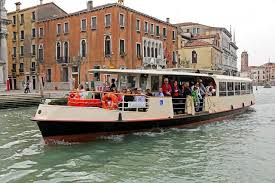 At Ca' Rezzonico a big crowd got on the boat making it heave from side to side and a glamorously tanned couple were discretely pushed up against me by the sudden influx. The woman who must have been in her thirties, was talking rapidly with her companion. He was was wearing one of those slim Venetian tan suits, a blue shirt, and wearing an elegant tie. He wore slim Italian loafers which I could see where I was seated just below him. A handsome man, jet black hair flying in the wind, he was the kind of man who in those days might have elicited a slight envy in me I confess. The woman was right out of Vogue. Her chestnut coloured hair held in place by a colourful brooch, and like so many Italian woman she needed little make-up but for a discreet black line to highlight her green eyes. And being a Venetian she wore a pair of flat shoes, sensible to navigate the bridges and cobble stoned alleyways. But finally, she wore a magnificent silk dress patterned in small Ultramarine blue stripes running every which way if I can remember it after so many years. She was beauty, and I was flustered especially when she was jolted towards me, glancing quickly at me and softly said "Mi scusi". Though we were all in the magnificent lagoon underneath the the shadow of the looming Salute to our right, it was still the sloppiness of Rush Hour like anywhere in the world.

The next stop was on the left at one of the first of threes stops for San Mark's and the Hotel Europa. The exit ramp gave away to a small alleyway which went right past the discreet entrance to Harry's Bar on the right.

These boats approach the dock slowly but then roar into reverse throwing everyone off balance anew. As we pulled into the next stop, the boat lurched, heaving everyone back and forth. And  it was this last jolt of the vaporetto, and as a consequence, created for me a dilemma from which I recoiled with the grandest cowardice. For on that last jounce this beautiful woman's dress collided with my palette, brushing it lightly as the French might say: "ç'a frôlé", like a butterfly's wing.

Completely oblivious, she moved with ease among the other disembarking passengers to the boat exit with her handsome man in tow while I focused on her dress. For I saw with distress several fresh Prussian Blue streaks across her backside. I froze.

To be fair, I didn't have much time. I mean, what a terrifically awful scene it would have been had I jumped up and out at her to explain in my fragile Italian that due to my civic recklessness I had destroyed her beautiful silk dress. This alone would have created a completely different outcome to the story.

Then, again, the recklessness, no,.. the utter chaos of what I had unleashed would have been far worse.  For I had understood that such a well-dressed couple were not returning home after a day at the dry cleaners, no,,, they were out for the evening, and first stop was Harry's Bar where tout le monde went to be seen, to drink caprinis with movie stars and wealthy aristocrats.

All this flashing through my poor brain in a nano second while the boat, having filled up with fewer people now prepared to chug onward towards the Lido which was its final destination.

I sat in a state of shock and shame, and I slowly turned the palette around to see it disfigured with a broad swarth of blue and a bit of  lemon yellow. My mind filled up quickly with scenes from a film in my head about what was shortly to transpire. As the vaporetto pulled away, I watched the woman casually walking up towards Harry's Bar, cool and beautiful, unaware of the storm awaiting her fabulousness,.. and I thought,

"What have I just done?"

By the time the vaporetto was making its next stop further onward at the end of St Mark's Square I had already created a timeline for the mess I had made. Chaos would be unfolding, as the woman took her seat at a table. Prussian Blue would quickly find its way outwards and into the dining room like a virus. It would move with stealth everywhere. It was just a matter of time, I surmised, before all Hell would break loose.

I imagined several scenarios but the one which stayed with me after 40 years is this one:

I saw the Head waiter showing the couple to their table. There might be a little air-kissing for acquaintances on the way. The Head waiter would then hold the back of the chair for the madame, the madame would gently fold the back of her dress with one of her small hands to glide herself smoothly in so as not to crease her lovely dress. And just from this gentle manoeuvre she might have felt the sticky oil paint with her delicate fingers before bringing her left hand up to see an errant blue swatch imprinted across her fingers.

Even after all these years, I can not envision the look of confused horror which must have lit up her face as she jumps up, spins around and sees Prussian Blue on the base of the chair while at the same time grasping at the back of her silk dress incredulously.

Would she yell at the poor bus boy nearby? Would she scream, or just cry out with anger? Who would she blame? The entire room would go deathly silent for sure, and our poor heroine, whom I now call her, is shaking her slender tanned wrists with emotion. Flapping their clean hands, waiters in white, scurry around the table like impatient geese. This is now an Italian film. Her handsome companion suddenly standing up in solidarity, clueless. Who could blame him?

How long before all the main actors found the cause of this pandemonium? 5 minutes? Ten? At least for a few long moments anyway, I mused to myself already, at a safe distance from ground zero by now. But Prussian Blue would have the upper hand in this comedy, or drama, depending on whose perspective.

Eventually the culprit would be identified as the poor woman's dress and she would eventually find her way to the ladies room where the smartly dressed but elderly attendant would help her smudge out the paint while ruining at least a dozen white linen towels. Our heroine hoping to clean it up enough to get through dinner. Her mind, dizzy with questions. How? What? why? (Ma come?) Would she remember the weird looking fellow with a palette seated on the vaporetto?

Meanwhile, in the dining room, waiters would have removed the infected chair, replaced it, and cleaned away anything Blue. The Head waiter like a house dick in a 40's film would have nervously circled around other tables to see if there was a bigger problem of BLUE elsewhere. (BLUE! Sacré BLUE!)

The other diners discreetly inspecting  jackets, dresses, jewelry, and even socks and shoes before getting the "All Clear", turned back to their own meals. Suddenly, there was something interesting happening! And this would be great dinner gossip for years to come.

Eventually our heroine would return to the dining room. And because of her beauty, her return might elicit a brisk applause as she entered, cheekily inspected her new chair to everyone's amusement before seating herself quickly, though now on a towel placed over it stealthily by a quick thinking waiter.

At the same time, the cowardly painter having arrived at his motif, had set up his easel and begun to paint San Giorgio before the sun set. 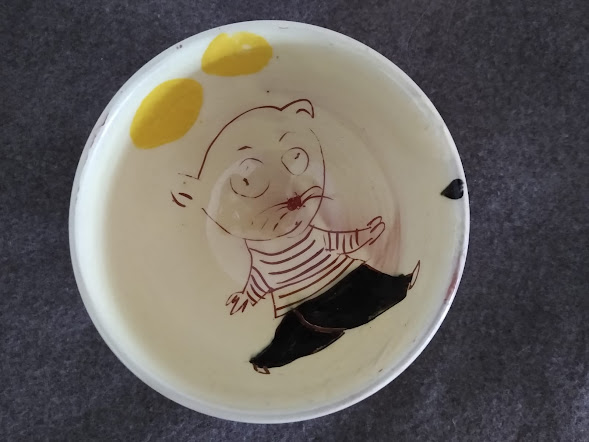