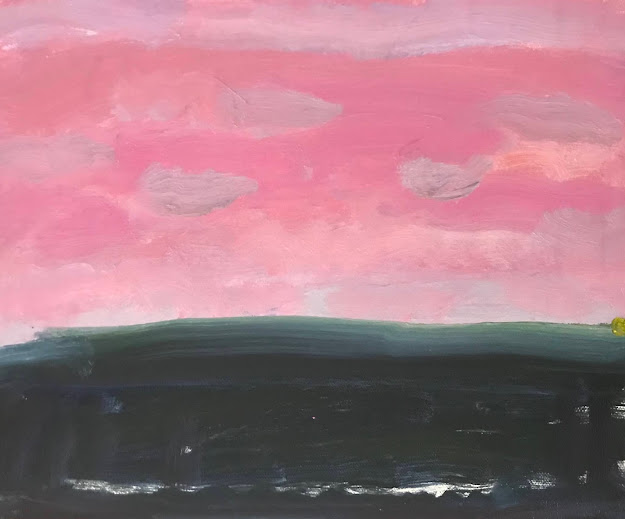 Evening prayer Brunswick Heads, 9 September, 2020, oil on canvas board, 30 X 25 cm
It isn't often that I want to throw in the proverbial towel while working on a picture but I used to, often, all the time, actually. It was because I stumbled and lost faith. This is a terrible fate to befall a painter. This used to happen a lot.
I enclose these two examples of my recent brushes with failure. This is to say that I had lost hope, and given up when I suddenly found a weird kind of key which re-opened the door to Ali Baba's cave.
In my time, I have jettisoned canvas boards over cliffs, thrown them into ditches, into trash bins, and even into the Grand Canal in Venice. Only rarely, did I possess a small hint of guilt for my selfish act inflicted  upon poor Mother Nature. I would find myself in a state of such wretchedness and self-loathing that I was beyond the pale, as they say. I needed an act of destruction to expunge my fragile ego of such failure. And I cursed the Muses who only laughed at me from high up in the clouds. I would make amends if I could.
Fortunately, I have changed over these past few years, so much so, that now  when I 'lose' a painting I seem to be able to stop, take a breath, step back and assess the situation.
This is that wondrous moment when I decide that I have nothing to lose, that I need just 'let go'. As the Zen wise guys say:
"We are already dead, what's the problem?"
With any means necessary I seem to push and pull at the image as if it was no longer a cardboard canvas but magically made of soft rubber or even kevlar. My brushes go to work on it without fear of retribution (punishment).
Like failure, even the idea of success falls away, and in a flash, I see the frustrated child in the corner of a classroom trying to fit a square peg into a round hole. It was always me.
And somehow, out of that fury, a phoenix rises.  My brushes find a pathway back into the painting, punching even. And though the motif has lost its bloom, I motor on, on the fumes of memory.
The memory is everything for an artist. Intuition is boundless grace, I often think to myself proudly.
And I like these studies because they are scarred with uncertainty, and they now live like sloppy solutions to my strange and personal problem of 'how to paint', despite all my efforts.
Whether a picture works, or not, is irrelevant at a certain point. (again, the Zen wise guys would say it was always irrelevant). But I secretly rebel against these guys,
"F**k em", I think to myself in the existential pinch.
But it IS the skirmish which really counts;... so was I brave, or a cowherd?
It doesn't matter because I'm dead already.
P.S. I didn't see the two drips of paint at the bottom on the left and right which resemble two dogs. The marvellous unconscious dog within me! 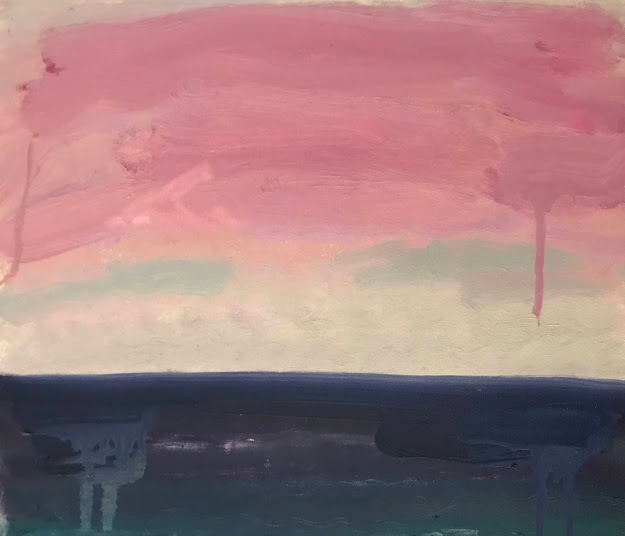