the Angels of Auschwitz and Sarajevo 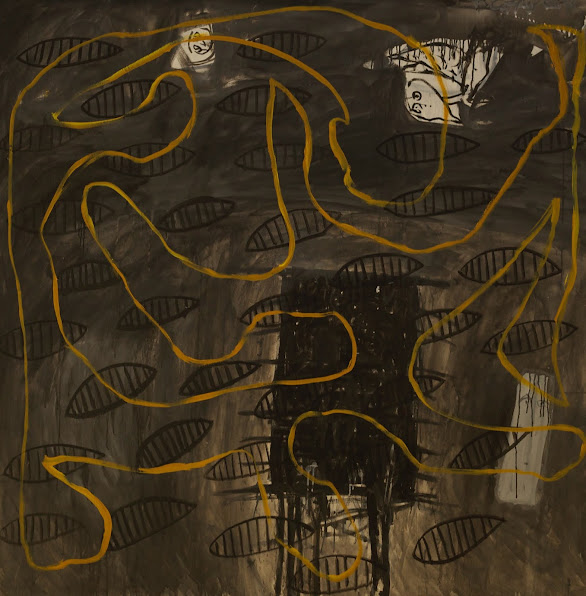 Auschwitz, Summer 1994, Châteaunoir, oil on canvas, 150 X 150 cm
Around 1993, I began a series on the theme of war. I became very upset about the slaughter in the Balkans. Europe faced another genocide. I had put on my studio wall a photograph taken from The International Herald Tribune which was then my main source of news at the time. I still have it somewhere. It was a simple picture of a young Muslim boy at the foot of his father's grave stone. It killed me for some reason, maybe because I had lost my own father, albeit under very different circumstances. But it opened up an emotional hole inside me all the same.
I made a few paintings that summer in my small studio at the Châteaunoir.  It was always hot during the summer months and cold in the winters. But it had a skylight which pleased me, along with two windows, so it was well lit. The picture above came after the Bosian/Sarajevo paintings. Like many people I have always been horrified by the atrocities which the Germans perpetuated upon its own citizens and so many others in Europe during that time.
I think I have always been more intuitively interested in the suffering of humankind than any spiritual bliss which I might found around me. My early portraits, as a friend once told me, looked as is they were about to commit murder. Though I was a little surprised by the observation I quickly understood its truth. Pathos has always been at the root of my actions whether I liked it or not.
So I wanted to see if I could express the cruelty of war.  I am not sure I succeeded in this but in the next few weeks I will show some of the others which work better, more raw. I rarely ever put these things around my old, large home because they were just too difficult for people. I suppose that is why my painting had changed a little later on to became more mirth, less dark.
Posted by cloudsandsea at 22.9.20