memories retained like grains of sand in the end 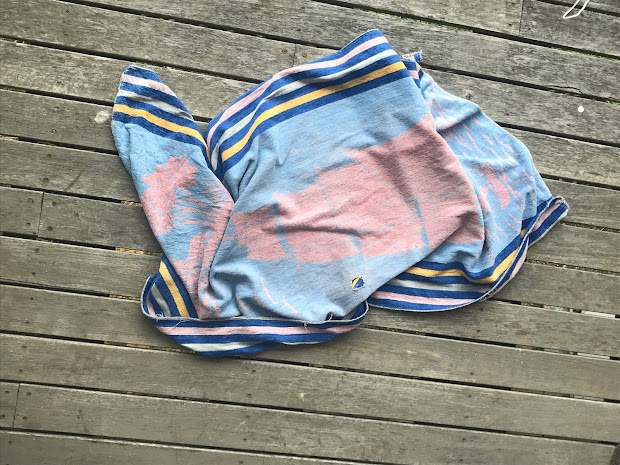 The absurdity of what I remember, and what I forget, how I remember it, and why I no longer remember it, is the stuff which will certainly put other people to sleep. Come to think of it, it is probably something that Lydia Davis would write about. But being a fan of hers merits that I indulge in all this.
Who can forget their first kiss after all? Or too, their first bit of intimacy, because these images are almost always framed and hang on select walls in the most revered and storied cells of our memory.
I do remember these things! But, I can also remember the most banal and mundane of small things. Because I am so weird, for example, I remember how I acquired these towels pictured herein, even if the dates are not precise. I remember the anecdotes around them and I created meaning in them, which to be fair, is strange!
Frankly, I don't know many sane people who would remember such things, nor would they care if they did. But being eccentric, I do. How can I remember these inane, dog-eared memories against the blur of so many others in the tunnel of my life? I don't even remember whole winters of my life.
The first towel above, I have had since 1985, sort of. It had been in the small house which I rented in Le Tholonet between my stays at the Châteaunoir. It was tiny 'cabanon', as they call it in France, two small rooms full of more Provençial charm than comfort.
Anyway, I somehow made off with this towel, and it has been with me ever since. But on a note of irony, its original owner, and my friend,  came to visit me here in Australia from New Caledonia for a few days last year. Out of the shower one morning I noticed he was using it. Out of the blue, I suddenly asked him if he remembered it. From the look on his face I saw that he didn't understand the question's relevance. I repeated it, but still getting nothing from him, I told him that it was from 'Le Maguy' which was the name of his small cabanon. OK, all he said was "Oh really", then went to put it on the outdoor railing to dry in the morning sun. Anyway, I took a certain ironic comfort in this small exchange after all these years.
The green towel below came from when I lived briefly on Charles Street in Greenwich Village. Where I bought it was irrelevant, but I always remember that I had once put it on the winter radiator in the bathroom which then burned a hole through it like a pair of sunglasses. In this small loft I first began to memorise poems, a habit I still have. By the John (the throne) was Samuel Coleridge's Kubla Khan which had always fascinated me since grade school years before. So, I began learning one line a day, then continued on and on. I still know it as I still know several poems by Keats which I also learned line by line whilst driving around Europe. But this holy towel still reminds me of Coleridge on Charles Street in Greenwich Village. 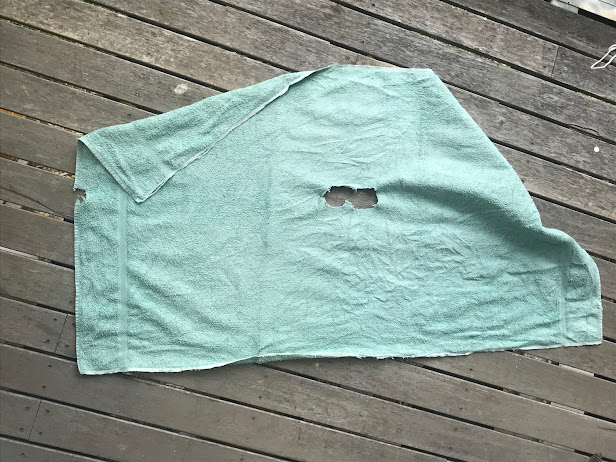 The blue floral designed towel came to me one day when I had gone to Decathlon, the French Sporting goods chain store in Les Milles just outside of Aix-en-Provence. It was a hot summer day and I had gone for tennis balls but on a whim I also picked up this towel. I remember it all so clearly, (which I admit is so weird) I opened up the heavy sliding door to my white VW camper van and threw everything into the back of it as the summer heat shot out at me. I am surprised that it survived so many outings to La Roche Platte in Cassis. Long before Instagram, there were already dozens of photos of it, with me and friends on that flat nudist rock on the Presque Isle in the Calanques eating melons. 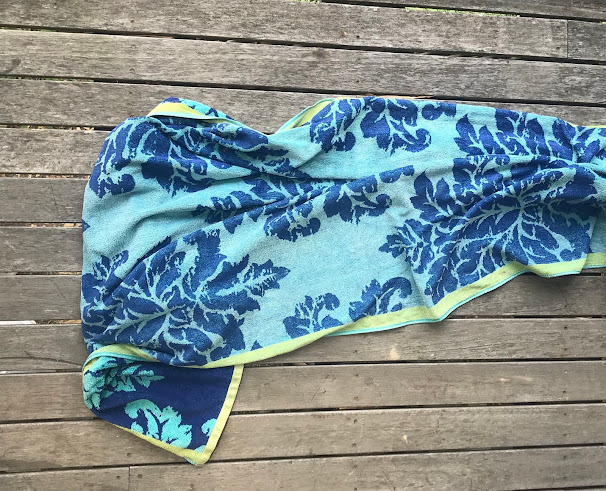 This pink and orange towel below is the latest acquisition, and it came to me when a former girlfriend left the house with her young daughter. I was supposed to send it on with her remaining personal items, which I dutifully did, folding and packing everything with great care. But I kept this towel out of selfishness. (I am a towel thief!, enfin!)

I did so because I love the colours of it but also, I kept it due to a sentimental streak. I had wanted to keep it because during those brief years I had taught her young daughter to swim, braving the rough surf at the beach. These were joyful times. And afterwards, she would dry herself off with it and wear it as sarong all the way back to the car and fall asleep in the back.

She loved swimming with me, holding my hand as we confronted the large waves, sometimes going under them, sometimes jumping over them. "UNDER" I would yell out to her, or "OVER" at the last minute. This is a rough sea and she couldn't get enough of it, she was like a small seal sometimes slipping out of my hands in the force of the waves, and I would panic. I was never without fear of my great responsibility because people here often die on this beach every year. Sometimes the rip was so strong that we had to abandon swimming much to her displeasure but she couldn't know the danger. She knew only the pleasure, such is the innocence of youth.

But with her mother it was Danger and Pleasure mixed together almost as perilous as the Australian surf. What do we remember of these intimate relationships into which we find ourselves swirling around? What is it about these loves which ebb and swell, pullings you under, dropping you off, sometimes even letting you body surf with bliss between the sheets? Where do these memories dwell?

Inevitably like the dangerous sea, the fickle human heart rules. And too often, there is nothing which remains of the love affair but a towel and a few grains of sand.

Isn't that how God speaks to us of our time on earth? 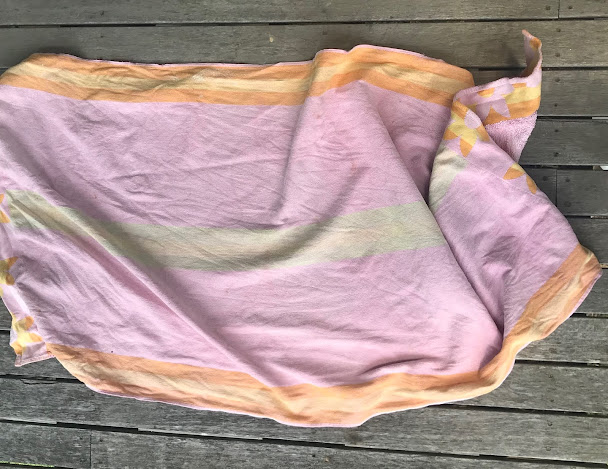