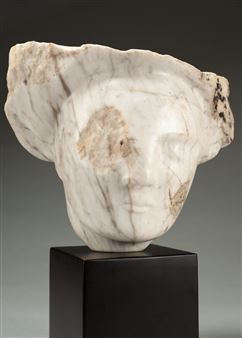 While driving home from the beach the other night I listened to a BBC interview with the British sculptor Emily Young with whom I was not familiar. The interview took place last year in Tuscany where she lives and works. I was fascinated and kept listening upon arriving at home.

After seeing her work I vaguely remembered that I had noticed her marble works here and there from time to time. But apparently I was not curious enough about the images to find out more about her. Possibly I was not taken with it.

But the interview triggered my curiosity. And though she had a way of speaking about the marble which almost sounded like a cliché; (like how for instance, the stone informed her what was going to come out of at the very moment when she first touched it) I stayed with it anyway and soon realised when I googled her and that she really had something.

It's a great reminder of just how judgemental I can be before I have all the facts. Hmmmm. But I am learning.

I also think that the images I had previously seen of her work, felt overly stylised and somehow I couldn't get past it. I didn't understand it. Thankfully, I have had a second chance to re-adjust my feelings and thoughts about her sculptures.

I will let the images speak for themselves, and any information about her can be gleaned from the net. She is a very well renowned sculptor in Britain but certainly celebrated worldwide, and she is deserving of her recognition. I will look for her on my next trip to Britain. I imagine that many of the following pieces are situated outdoors in gardens and terraces, posed upon places where the stone can again sing to birds.

She is obviously a very gifted woman both as a sculptor and as an artist, with something unique to say to our world, and adding something to it. There is also an edge to her work which centres upon the paradox between the inchoate and the ruin which is crucial to her personal artistic sensibility.

There is a famous anecdote of a young boy looking at a life-size marble of a lion, he asked Michelangelo how was it that he knew that a lion was already inside the block of marble?

This provokes a greatest mystery of what art is all about. Is it an artist's intuition, or the 'Muses' from the heavens which whispers into an artist's ear? Does an artist need to ask permission to pull an image out of a stone or canvas? Or is the creative act executed with the zeal of a convict about to die? Myself, I take a road between heaven and earth and declare (for myself only) that it is the ritual; the habit of hard work over the long haul which gives up secrets to those willing to sacrifice everything (worldly) for their craft.

Emily Young stops her work just at that place where Rodin really begins to get into it. As much as I as love everything about Auguste Rodin (especially his drawings and watercolours), he attains such perfection that I secretly desire the opposite from him, something faulty and fragile, a thing heroically human, for instance. His art is godly. Ditto, for Michelangelo whose finished work is too finished and polished. (David, sacré bleu! what was he thinking?) Personally, I prefer his unfinished slaves.

Emily Young's work dares to exist on its own terms; androgynous heads, barely released from the underworld of adamantine ambiguity.

What moves me also is her own apparent surrender to Pathos, an unsentimental predisposition to it, or perhaps an acceptance to it really. It is a sensibility which only great artists possess I think.

And I share this predisposition in my own work. I sense it as an integral part of any art form, be it poetry, music, cinema or painting, writing, even architecture, ....... the works; everything truly noble already possesses within the seeds of suffering and sorrow.

Yet of course, revealing this, does not mean that I am a brooding malcontent without a sense of humour. For humour is just on the other side of pathos, a place where the ironic denial of our own mortality reigns supreme.

In any event, Emily Young is the real deal. 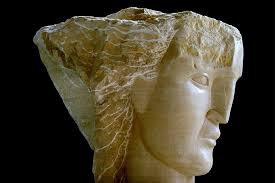 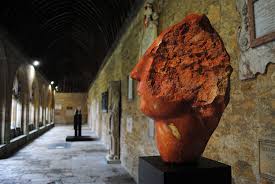 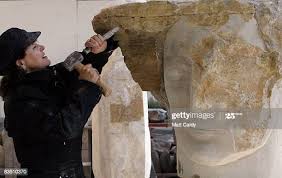 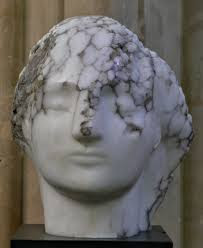 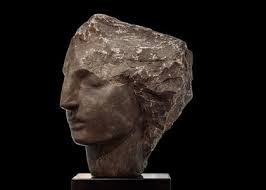 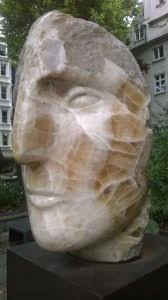 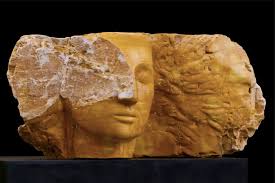 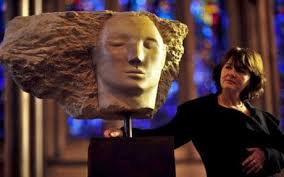 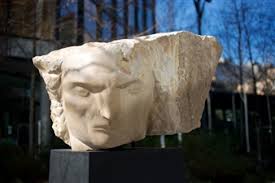 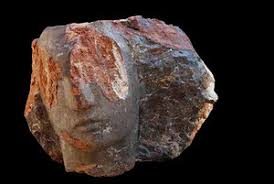 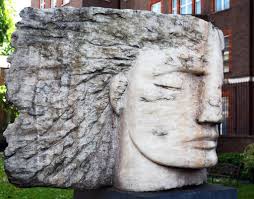 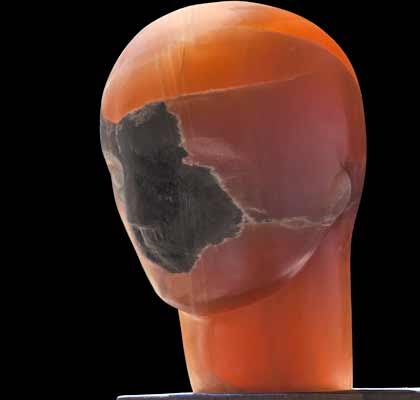