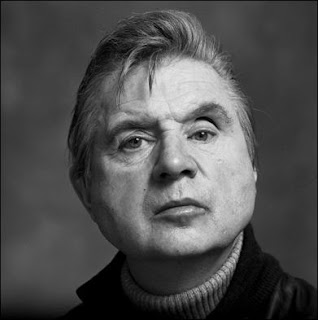 There is a show at the Tokyo museum of Modern Art of Francis Bacon's paintings. I went to see it there as I had never really ever seen a large show of his work.

Recently, I had however seen a documentary containing perhaps the only real interview he ever gave to an art critic whose name I forget,  plus footage of him and his friends at the notorious bar, the Colony Room Club in SOHO back in the late 60's. Amazing stuff, and I found myself enamored with his remarkable personality; one of tremendous wit but at times sarcastic cruelty, he was a drinker after all. (an anecdote: he once told an admirer of his work, someone who had wanted to visit his studio: "You wear bad ties, why would I show you my work?") Ouch! But, he had a tremendous artistic personality, one of obsessive and unabashed curiosity into the baser aspects of the human body, and human soul no doubt. This is the obvious, of course. In this interview he comes off to me as very bright and completely unpretentious, without any presumption regarding the direction of his work or its value even. He simply painted, and that was that. If others didn't like, so be it. One has to admire this steely response to the outside world, especially in the ego-driven world of Art.

I had also seen the remarkable film starring Derick Jacobi a long while back which I found horrifying and beautiful all at once. There are scenes recreated of the Colony Room which capture with uncanny verisimilitude the alcoholic antics of Bacon and his friends.

He created even his biggest works in a small messy room in South Kensington which also says a great deal about him. He loved Velasquez, that is certain, but was less certain about whether or not he had done anything of significance from using these great paintings as models for his own. In fact, so much can be said about him as a person, as well as an artist that I could easily go off track. I wanted to simply articulate a few feelings which his work provokes in me.

So armed with just these previous encounters with Bacon, I went to see the show in Tokyo.

(From my notes made in the exposition):

The first problem I have, and perhaps it's the only one really: How can I enter into Bacon's world? At the risk of giving offense to his admirers, and I know there are many, I personally feel excluded from his inner world. Why is that?

Ok, it would be easy to suggest that I simply don't get it. That is possible, but the problem for me is that I 'almost' get it, and thus my frustration.

I feel that I am too much of a sensualist who loves Tintoretto to find movement in Bacon's paintings. This is what I find frustrating. For me, it comes so close, but then it seems frozen in a kind of two-dimensional graphic space which fights with the often intricately rendered detail of heads and bodies. I have often felt that his work has the light of 'illustration' unlike the light I love in so many different painters from so many different periods in art history. I think of Massacio and Piero della Francesca; of the torment of Goya and Otto Dix.

So, my feeling is that I find myself strangely left out as if watching a photo of a scene going on inside a house across the street; a scene which excludes me.

There is a study for a portrait of a man, his head sits in the middle of the picture, a tiny head in a sea of blue. I am reminded of Giacometti. How would he have created a sea of light in all that darkness. I know its unfair to compare, but most of us do it anyway, even secretly when we are alone in our studios, or bedrooms with no one around. Comparison is inevitable when push comes to shove.

I realize after looking at already a few of these portraits that he worked from photographs which sadly feel too present in the paintings. The color harmonies feel contrived, or worse, don't relate at all to one another, cool orange next to a field of cold greens....I find no resolution. I am left standing at the edge of a cliff, cannot jump but cannot turn back either. I am stuck, and I realize that many of his admirers would say:

"Yes! That's the anxiety! That's his genius. It is just this place that he comes from and articulates so well."

And yet, I still cannot find my way into or out of this 'anxiety' because in fact, it still too feels contrived to me.

There is a study of the Pope Innocent X dressed in in a pink frock and seated in a bright green chair) which made me think of Matisse, and just how he might have rendered it. Matisse invites me into his world, and through each and every picture I never feel  excluded. I have the feeling that his painting never stop moving unlike Bacon's which seem to cement me into a darkness as if I have been buried alive.…. so why does Bacon keep me out? No doubt Bacon himself would like that. But if he hadn't been a drinker would he have cared? I want so much to like his work more than I do and that is my frustration.