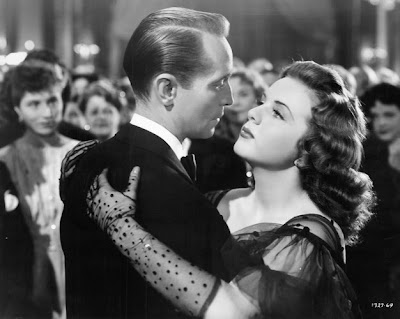 Deanna Durbin dies at 91.
'Say it ain't so!' as they truly did often say in so many films of the forties and fifties, films, so many of which we saw as kids in black and white on the television late at night.

I remember Deanna Durbin, the all American kid, if ever there was one, albeit fictitious, and dreamed up by Hollywood during the Depression to cheer everyone up.

But I really remember her because of the pivotal role she played in a wonderful short story by Ray Bradbury called The Anthem Sprinters. There was a time in my life when I think I read everything he ever wrote.

Bradbury and his wife spent a year in Ireland back in the sixties when he was hired to write a screenplay. He was having a tough time of it and decided for distraction to write a few short stories while he was over there. Apparently, he did fall head over heels in love with the Irish.

The Anthem Sprinters is the story of a gang of friends, who, from their bar stools at the local pub (naturally), organized races to see which one could get out of the movie theatre the fastest. The rules were simple: The races were between two runners, who having sat through a film at the local movie house had to race out of the theatre and back to the pub where their friends waited impatiently. This was a serious pastime and piles of money were wagered on each runner. In fact the best runners were 'handicapped' by being seated in certain rows near the front of the theatre. The slower ones were given the advantage of being allowed to sit near the back and closer to the exit. Both runners were seated on the aisle however, but the important caveat was that they could not move until the very end of the film but before the start of the Irish Anthem. Once The End was displayed they were off.

In his marvelous story Bradbury gets caught up in the excitement and waits with the others at the Pub for the arrival of runners. Only one of the runners shows up though, and everyone at the Pub is scratching their heads. They sent someone down to the movie house to see what has happened to the other runner. Did he fall and break his arse they wondered? After a while this guy comes back to the Pub to report. It turns out that the 'favored' runner who had been handicapped in the first row seat hadn't actually left the theatre. When they found him he was seated in the empty theatre and still balling his eyes out because the heroine in the film had died. The heroine was Deanna Durbin.

She eventually left Hollywood and went to live in France to raise a small family in 1949.
Smart girl!