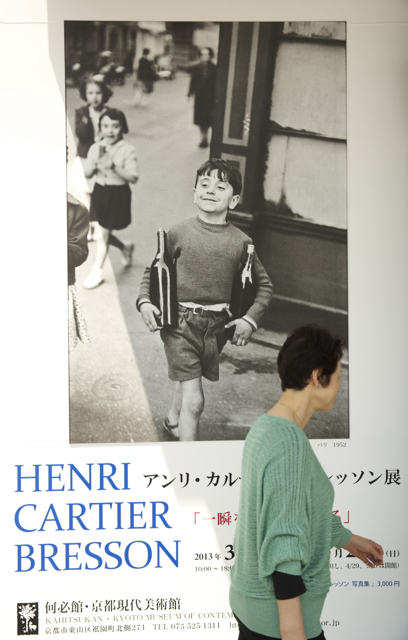 I was skeptical about paying ten euros to see a small show of HCB believing that I had seen most of his things either in shows or books over the years. But it was such a sexy poster and being here in Kyoto, I was feeling a little homesick for France so coughed it up, as we say in America. And I am glad I did as there were some images which I didn't know, and a few of them were mesmerizing. One, in particular; a wide shot of a young boy in a shabby looking street of Paris in 1932. The look on his face, not sad, but somewhat worse, his expression seemed shorn of any hope that he would ever escape that miserable looking street. Many others from far flung places, which were indeed more flung far than they are today: India, Spain, Soviet Union, Greece, Mexico, they are now just a low cost ticket next-door. But HCB certainly lived a wonderful and productive life. In the show there is great self-portrait of himself: Laying down on what appears to be a wall, he shot everything below: (horizontal though) his sweater, a bit of trousers, and his naked left foot folded over his right ankle. It said: tired feet!
I was happy to see the show after all. I realize just what a giant he was for a whole generation of photographers. His work in black and white, or monochrome, as its fashionable to say today, seems always anchored by a simple kind of unity, either pictorially or through something going on in the subject. I don't know much about his life but I do know that he always drew, and made paintings. Towards the end of his rich life its all he wanted to do. His beloved Leica would have felt lonely sitting on a desk or tabletop.

For myself, and my recent adventure in photography, I feel that taking pictures has only strengthened my understanding of what it means to 'seize' Form. I have watched my paintings become more graphically impaled upon the visual world around me. Its as if most of my waking hours are in pursuit of the 'next' image whether it be a photograph or a painting. That it can captured so fast with a camera is marvelous thing, but, a painting  alas, takes time. My drawing, for the moment  has been sulking, but whenever I do make something, I am surprised at how much it has evolved. It is more graphic than ever before and I believe this is a good thing, surely its from all the photos I take.

The show ends tomorrow at the Museum of Contemporary Art here in Kyoto.