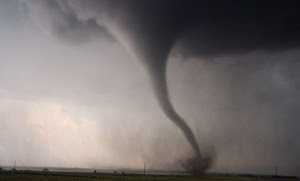 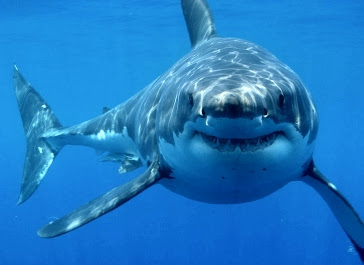 So, what is it about sharks and tornadoes that frighten and fascinate us all? The terrible destruction of the recent tornado in Oklahoma remind us all how fragile we are no matter where we live. People will always live in 'Tornado alley' just as surfers in South Australia will always surf waters known to be the home to White Pointers.

Is it the perfect beauty of both these 'monsters'; their aerodynamic lines; their unpredictability; their capacity to instill in us the most intense and irrational desire to watch them from as close as we possibly can, yet still be at a safe distance away? Is it their ruthless appetite for ripping things up in a matter of seconds; for serrating objects in half, for their indiscriminate violence? For all their amoral destructive behavior they appear almost benign. Just look at the happy face on that shark!

There are shows on television which chase tornadoes, and there are all sorts of operations in South Africa which lace shark infested waters with chum, then lower spectators in steel cages while White Pointers circle in a frenzy. We cannot seem to get enough of them, until they get us.

further reading for the really curious and not faint of heart! One gleaned from a site entitled White Shark Facts, the other entitled  Tornado Facts Website.

Tornado Facts!
Each year, about a thousand tornadoes touch down in the United States, far more than any other country.
Waterspouts are tornadoes that form over a body of water.
A strong tornado can pick up a house and move it down the block.
Nebraska, South Dakota, Oklahoma, Texas and Kansas make up Tornado alley, where tornadoes strike regularly in the spring and early summer.
Many houses in tornado alley have strong basement shelters.
Some people have seen inside a tornado with their own eyes lived to tell about it.
Knives and forks have been found embedded in tree trunks flung from a tornado.
Usually a tornado starts off as a white or gray cloud but if it stays around for a while, the dirt and debris it sucks up eventually turns it into black one.
3 out of every 4 tornadoes in the world happen in the United States.
Thunderstorms most likely to give birth to Tornadoes are called supercells.
Tornado winds are the fastest winds on Earth.
A Tornado in Oklahoma once destroyed a whole motel. People later found the motel’s sign in Arkansas.
A Tornado can sometimes hop along its path. It can destroy one house and leave the house next door untouched.
In 1928, a tornado in Kansas plucked the feathers right off some chickens.
In 1931 a tornado in Mississippi lifted an 83 ton train and tossed it 80 feet from the track.
The United States have an average of 800 tornadoes every year.
Each year, dozens of Americans die from tornadoes.
Usually, a tornado’s color matches the color of the ground.
Some tornadoes make a considerable amount of noise while others make very little. It depends on the objects a tornado might hit or carry. A tornado moving along an open plain may make very little noise.
Some people think the crop circles in the UK are the result of weak whirlwinds. About 60 of these small tornadoes are formed every year in Britain.