The anecdotal president and J.M.W.Turner 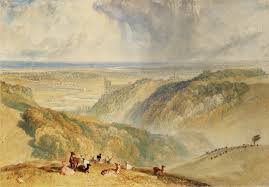 This president has been many things for America, from his dishonesty to all the really stupid things he has done to push our country backwards into a dreamy world constructed of his own personal anecdotal details. He has tried to reshape America into a doctored photograph tacked up on his bedroom wall. He is the anecdotal president, full of baloney, as they used to call it in the more polite America of yesteryear. Now, they just call it s**t, as in s**thole, which also could be one of this president's more infamous insults. He is a moron, a deceitful one, but more like a reptile which is only motivated by fear and greed (but both in the same foul breath). But, yes, everyone knows all that already!

I didn't mean to go off on a tangent. But because this word anecdotal has become le mot de jour in the past few years it got me thinking about Turner. More precisely, it is something which has always bothered me about so many of his paintings, both large, small, in both watercolour and in oil. Under these magnificent mountain skies and seascapes, figures resembling tiny porcelain figurines always seem to litter the surface of the foreground. It has driven me a bit nuts, actually.

Needless to say, I don't like them, and I will admit that perhaps I don't completely understand why he would ruin an otherwise unified painting to include these small things which only distract us (me). Sometimes they are less bothersome, and can even work to place the landscape, or seascape into a certain context like the image below (but very unlike the otherwise splendorous watercolour at the top) 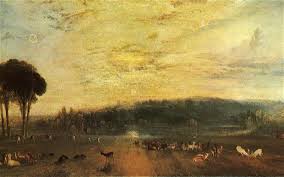 To what purpose do they really serve, a painter can ask? They are habitually well crafted, well depicted, well painted too. And yes, it was an accepted form of classical painting which I suppose, arose from the tradition of depicting classical themes in paintings. The centuries proceeding Turner, both in England and Holland, had produced a ton of these kinds of 'landscapes with figures'. It was a grand genre theme this Man intermingling with Nature, but before, of course, man went to war against it at the start of the Industrial Age, consciously or not.

Humankind in Harmony with Nature was a big hit with wealthy collectors, and families of great historical power in Britain. They had country manor homes to decorate, city palaces, and often castle estates like Petworth House which is home to a magnificent collection of Turner's work. I have visited it several times over the years, most recently with my dearest friend Niki McCourt who lives in East Sussex.

One thing I love about the British is that they possess a genuine love for their land and wildlife. They take pride in the protection of it through the National Trust which lords over every centimetre of this beautiful nation. Rich or Poor, they love their gardens. Sadly, the almost opposite of our own president and his minions.

So, I think the question for a painter (and the point of all this) is why did Turner fill so many of these paintings and watercolours with extraneous figurines in the foreground? it certainly wasn't because he needed a device to push the middle ground back into the distance. He was far too great a painter who could manipulate with ease any space in his pictures with a small flick of a brush or a wipe of a cloth. 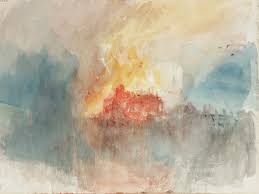 The burning of the House of Parliament

I wonder if it wasn't simply because wealthy collectors were too used to seeing figures in the foreground, maybe they were too comfortable with them, traditional by nature, and too conventional to see differently. They were not artists after all. And, Turner knew that, he had expenses like everyone else.

So, perhaps towards the end of his life his artistic sensibility, his intuition, was to simply let go of the artifice of these figures in the foreground. He was wealthy enough to truly let go of any financial worries by then. At this point he was also already preoccupied with the idea of the sketch as a work of Art in its own right, and  done rapidly in front of his favourite motifs on the coastline in Sussex or in sensual Venice .

Below, are some of the later things which reveal his clairvoyance; his intuition which blew him into the 20th century like a hurricane. 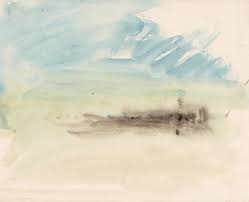 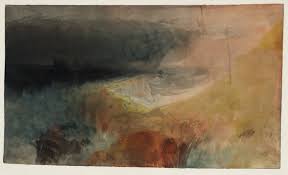 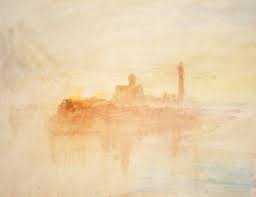 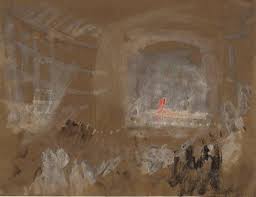 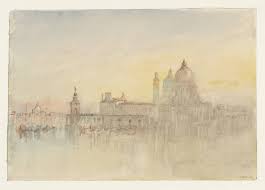