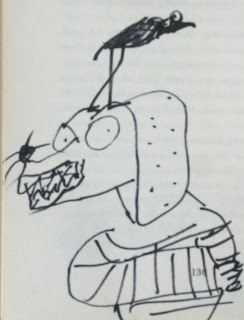 I hate that I am not doodling (gribouiller) in these days. This small thing (petite chose) is from a few years back, done in a book I was reading at the time. I used to fill all the books I read with these kinds of things.

I wrote a children's book about 16 years ago. I took the greatest pleasure in writing it. It was full of animals, but I knew one day after finishing the story I would have to illustrate it. I was terrified (terrifié) at this prospect for some reason. Eventually when I did sit myself down to start drawing, I realized that I didn't have a clue how to begin. I went out and bought photo books of dogs and cats only to sit down in frustration when I tried to "draw" these things. Finally in complete desperation (désespoir), I decided to chuck everything out (jetter tout), and hid the story away into a drawer of my desk (bureau). I then made the decision to doodle for 'a while', to see if I could find my own spontaneity. I gave myself no time limit and gradually this doodling became a habit for me. After a while, I was doodling while on the telephone, sitting in cafes, watching the news, and even while reading books. All sorts of creatures came out: long beaked birds, four-legged things with human looking faces, dogs in three piece suits............these things evolved into wonderfully strange, but lucid self-portraits (autoportaits). They were like the tiny round (rond) mirrors which dentists use to better see inside, and nothing seen, was  rejected. Over the next few years I re-discovered 'my hand'... something lost to me (perdu) since I was a child. It came back through the act of simply drawing from my own imagination. Aside from the content, it isn't just the squiggly line, but a concept of space and borders which has now infected my paintings as well. It opened me up further into the world of the Surface.

So now, I feel its absence in my daily life (vie quotidien), like an old friend whom I haven't seen in a while, if one can pardon the cliché.

Its been maybe 6 months since I have doodled. Perhaps (peut-être) it time to begin again.