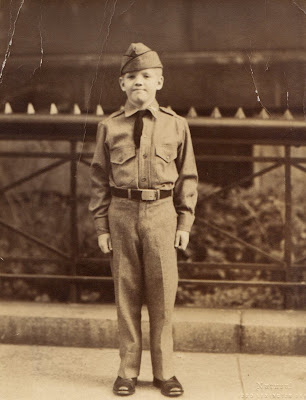 Today is my brother's birthday (anniversaire). This photo was taken of him when he was around 9 or 10 perhaps? He is the only person who can really crack me up (se marré). I don't know anyone who is funnier, and yet, its a very private kind of  thing. He is very discreet (discret). These days of course, everybody is funny, and with a big ambition and a sense of humor (sens d'humour), they go to Hollywood. But my brother just went to Australia.


He is wearing the uniform of the Knickerbocker Greys which our mother forced us (imposer) to attend twice a week in New York. It was a very Social (haute société) kind of thing. We hated it, and it certainly contributed to our love of Frank Zappa and Thelonious Monk a few years later.


Last night, I was invited to a birthday dinner in a restaurant for Isabelle who runs the small bookshop (librairie) in town. I declined the dinner invitation but wanted to come by with a gift and to wish her  a happy birthday. I was late, when I opened the door everyone sang "Joyeux anniversaire .........etc". They did that for everyone who came in late. Isabelle was already there, as well as 2 dozen friends who were already lit up (arrosé) due to the flowing wine. I didn't stay long. As I don't drink anymore, nor do I eat meat, I am always a bit bored (d'ennui) by these things even if I like the people. I would rather be home playing piano, then, catching my brother in Australia later at night: