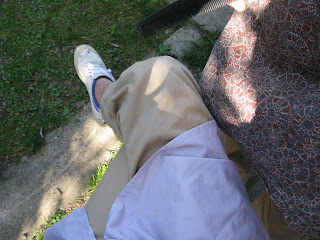 Here I am getting a haircut (coupe de cheveux) from Reidunn. We are sitting outside (dehors) in her garden on a brilliant fall afternoon. Everything seemed like it was going  well, I liked the way her body brushes up against me, the blackbirds (les merles) were singing, but suddenly she said, all too nonchalantly:

(merde!) I thought to myself.

It augered badly for me but since it was still so nice to have her rubbing up (frôler) against me I sat still, enjoying the present moment.

It always seems to happen that way: Going into the barber looking  only vaguely  like Robert Redford to come out looking definitely (incontestablement) like Gomer Pyle.


I remember an episode during my first year at University in France. I had a roommate, Michael, a  simple and lovely guy from Kentucky. We got on well. He didn't drink much but I brought home two bottles of wine one night I got him to cut my hair. I wonder why? Actually, now that I know the absurdity of it, it was
because I was afraid of explaining to a french barber (coiffure) how to cut my hair (!)

In any event, at first (au depart), he desisted (résisté), but I plied him with wine (bombardé) and then he began cutting. Honestly (honnêtement), he kept telling me that he didn't know what he was doing but I would hear nothing of it (je ne voulais pas entendre un mot!)

"Keep cutting!" (continue à couper!) I shouted over the Miles Davis record which I played constantly in those days.

When he finished, I looked into the mirror (miroir) and sobered up real quick. Knowing that it was all my own doing I kept my mouth shut and we finished the two bottles of wine. But Gomer Pyle looked at me in the mirror the next morning.

Another time, I had arrived in Paris to visit an old friend.  She is, and always was a lesbian, so I assumed that it would not matter (pas d'importance) if I slept with the Air France stewardess (hôtesse de l'air) who came onto me in the apartment that first night. Well, the next day before catching the train south I simply mentioned to my friend that I thought I needed trim (a trim for god's sake!)


Many years later, I recounted that story to another friend (woman) and she laughed (rit) hysterically. After she calmed down, she wondered aloud (elle s'est demandée) if it was really possible that I didn't know anything about the vengeance of a woman and its relationship (rapport)  to men's hair? She said:


"I mean its biblical for God's sake!"


So,...I have a problem with haircuts.