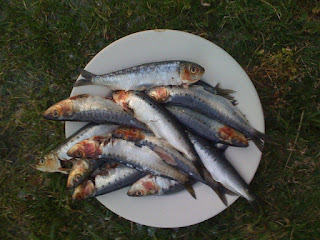 I invited my friend Edouard over for some fish. He is in his late seventies, and has been battling cancer of the pancreas since last year. Its been a tough go but he is hanging in there (il tient le coup). I visit him in his small house a few times a week but never stay too long as he tires easily. He is my very good friend here in the countryside. During the sixties he was a filmmaker, and as well, your fairly typical intellectual of which they are always many here in France. But I don't mean that as an insult, it could be taken for one in America, of course.

(Cher) Edouard was born in (Indochine) when it was the mighty Colony. His father was a wealthy Frenchman and the owner of several rubber farms. His mother; a very beautiful Vietnamese. I have seen her photo. Despite his illness he  is still very handsome with long locks of silver hair. He reads Baudelaire and Flaubert, quoting them with ease. He is writing something (quelque chose), a long book (une oeuvre) perhaps, but he is very discreet about it. Edouard can be very secretive! Its part of his charm. He tells me that he now lives in blocks (tranches) of 6 months at a time. Normally quite talkative, (bavard), I never have a reply to this. He doesn't go out much except to town to pick up Le Monde and some things at the store. Once a week an ambulance takes him 190 kms to Montpelier for his chemo therapy (chimio) then 190 kms back again. He says the driver, a local guy, is very friendly and drives fast, which makes the voyage as nice (agréable) as possible. The national health insurance program (sécurité sociale) picks up the tab.

Today was Sunday, and he came up for a few sardines done on the grill.