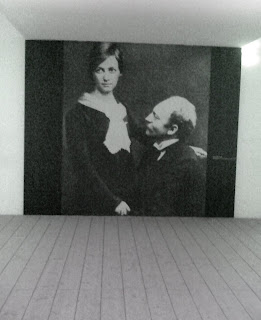 I love this portrait of Emile Nolde and his wife Ada. It was in the large exposition at the Grand Palais last year (l'année dernière). The show was great, a real surprise in fact, as I thought I knew his work but realized that I knew very little. He travelled a lot making at least one long trip lasting several years. He painted wild things in Papua New Guinea, crazy colored sunsets and portraits of magnificent dark man and women. He worked in Berlin with the German group known as Die Brücke (the bridge).

Its a beautiful portrait. It was huge, taking up an entire wall. I remember staying in front of it for the longest time, standing afar, then close up again. I kept returning to it, when finally I quickly snapped a few photos using a cell phone. The museum is very fussy (chiant) about no photographs being allowed.

There is a time in a man's life when he has learned certain essential things regarding women, he has arrived at a place where he is reasonably confident (assuré) in their company. He has struggled (lutté) to learn so many of the things which lead his way into a woman's mind and heart (coeur).

In France, seduction is everything (le tout!). One spends one's life learning these things. Then, almost suddenly, can it be that one has been robbed (dérobé) quietly in the evening of one's older years?.... the confidence and the grace: have they fled him, vanished (s'éclipsée), as if to the other side of the moon? I wonder if that is what I sense in this portrait. Or, have I gotten it completely wrong, this is but a moment of intense companionship and trust? 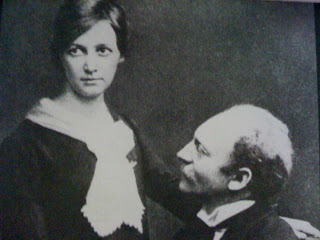