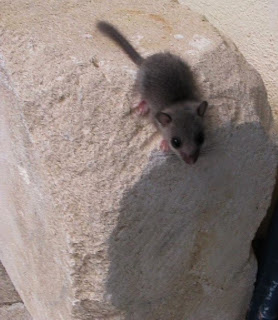 I have been trying to get rid of these creatures since the roof was finished and they found their way into it just 10 years ago. In fact, in the first week in the attic I heard something moving around in it. The mason had just finished les génoises and I thought maybe he had sealed in a small bird. I was just about to get ready to call the mason with my worries when I mentioned it to a local friend who laughed and said it was probably un loir which had already discovered a way in between the roof and the insulation. They become resident pests here in La Drôme which is about an hour's drive north of Avignon.

This small baby was sitting rather spaced out on the front terrace where I almost stepped on it. It took me a few minutes to figure out that it was indeed un loir which had somehow fallen down the long down drain and rolled out the bottom pipe which is rounded at a 90 degree, rather like in a cartoon. I picked up and it quickly melted into my hands. It was very affectionate.

My dilemma: What to do? I had been leaving poison out on the top floor for months now with no success as they are not as stupidly gourmand as rats, apparently. Too cute to kill obviously, but then even an adult loir would have been too difficult to kill. I would rather leave poison then confront the reality of killing. Je suis lache! In the end I decided to leave it outside where I found it to begin with. It was twilight and it soon curled up into a tiny ball and fell fast asleep. I put an simple iron chair over it so that I wouldn't come outside later and step on it. I checked several times. By midnight it was gone.

Les loirs can also live in the trees in the summer months and scrounge for fruit and berries. The dictionary says they are a kind of dormouse but they really look like squirrels with bushy tails and black beady eyes. They make a high pitched  screeching cry in the black of night, like a small murder.